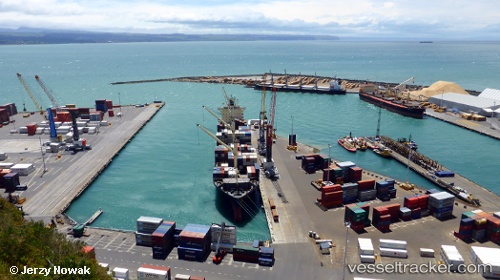 Napier Port, the third largest port on New Zealand’s North Island, has placed an order with Damen Shipyards Group for an Azimuth Tractor Drive (ATD) Tug 2412 Twin Fin for delivery later this year. The contract was signed by Sjoerd de Bruin, sales manager Pacific for Damen and Napier Port CEO Todd Dawson at Napier Port main office. Napier Port is currently developing a sixth wharf which, at 350 metres long, will be capable of handling the larger vessels that are expected to access the port in the near future. As a key transport hub for the Hawke’s Bay region of the North Island, the port already hosts a wide range of vessels including container ships, cruise ships, cargo and timber carriers. The ATD Tug 2412 Kaweka will join two existing Voith-type tugs at the port; the Te Mata and Ahuriri. Tractor tugs work best at Napier Port due to their ability to operate effectively in a swell, to tow indirectly, and their manoeuvrability, the last particularly important due to the tight berthing arrangements in the harbour. Just 24-metres in length but with 72 tonnes of bollard pull, the ATD Tug 2412 delivers just the combination of power but compactness that the Napier Port management team is seeking.

Ships could continue to be turned away from Napier Port for the next few days as an "unprecendented" swell hammers Hawke's Bay. Clifton Beach was closed by Hastings District Council on Wednesday and Napier City Council closed the Marine Parade viewing platform after tourists were drenched by a heaving sea on Wednesday morning. MetService meteorologist Tui McInnes said a slow building pressure system out to the east of Hawke's Bay had ramped up the seas, causing swells of close to 4m. McInnes said the 4m swells had the potential to "cause a bit of havoc on the coast" as it could possibly continue until Saturday morning. "The main thing that is causing the big waves is the easterly winds that are occur. "With a large space and a slow build-up it leaves time for some quite nice swells to develop," McInnes said. https://www.nzherald.co.nz/nz/news/article.cfm?c_id=1&objectid=12252333

A chemical leak which closed part of Napier Port earlier today, Dec. 17, has now been contained. Inspectors found a small amount of sodium hydroxide, a corrosive and potentially flammable chemical, on the outside of four containers unloaded from a ship this morning. The port was closed after the spill was discovered and the fire service was called in to decontaminate the scene. Three fire trucks, along with a combined hazardous materials unit and command centre were sent to the port at 8.20am. Fire Service spokesman Mike Wanoa said there was no danger to the public because a secure area of the port was blocked off. Fire crews had decontaminated the area by 3pm, isolating the four containers and repairing a fifth container - believed to be the source of the leak. The source container remained cordoned off.