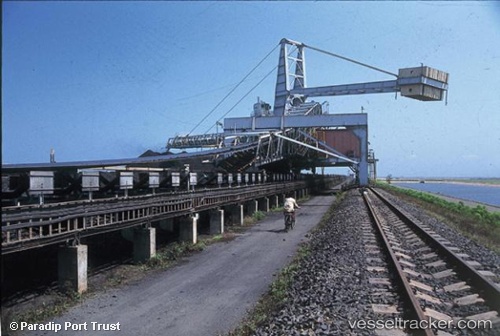 India has suspended operations at a major port on its east coast until an impending cyclone makes landfall on Friday, a port official in the mineral rich eastern state of Odisha said. India has started evacuating hundreds of thousands of villagers living along its northeastern coastline and also cancelled trains ahead of the severe storm. “Paradip port operations will be suspended from tonight, all vessels have been told to leave the port,” S.K Mishra, traffic manager at the port told Reuters on Wednesday. Source: Reuters (Reporting by Jatindra Dash; Editing by Sudarshan Varadhan and Kirsten Donovan)

India received its first ever shipment of US crude oil with state-owned Indian Oil Corp (IOC) importing a 1.6 million barrels parcel at Paradip in Odisha. MT New Prosperity, a very large crude carrier (VLCC), with a capacity to haul two million barrels of crude, left US Gulf Coast on August 19 and arrived at Paradip port. “IOC will process the crude at its refineries located at Paradip, Haldia (in West Bengal), Barauni (in Bihar) and Bongaigaon (in Assam),” the company said in a statement. A function was held at the Paradip port to mark the arrival, which was attended by officials of IOC, oil ministry and the US Embassy. “IOC, which became the first Indian public sector refiner to source US crude, has placed a cumulative order 3.9 million barrel (of US crude),” it said. State-owned Bharat Petroleum Corp Ltd (BPCL) and Hindustan Petroleum Corp Ltd (HPCL) have also placed orders for about 2.95 million barrels and 1 million barrels of US crude respectively for their Kochi and Vizag refineries. http://www.hellenicshippingnews.com/first-ever-shipment-of-us-crude-oil-to-india-arrives-at-odishas-paradip-port/