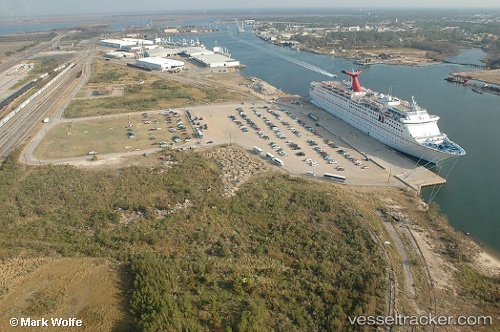 Port of Pascagoula returns to Port Condition NORMAL with restrictions

Heavy wind gusts during last night's storm blew a VT Halter Marine vessel under construction at the Pascagoula shipyard from its moorings, the company said today. At about 9:15 p.m., the ship broke loose and drifted into the Bayou Casotte channel. Port of Pascagoula director Mark McAndrews said it was the company's largest ship ever built, the Marjorie C, that broke loose. The 692-foot-long roll-on/roll-off car truck carrier, being built for Honolulu-based Pasha Hawaii, was launched in August. Tugboats were immediately activated, company leaders said in today's news release, and the ship was captured and moored alongside the pier adjacent to Mississippi Phosphates Corp. There were no workers aboard the vessel at the time, and there were no injuries. More at http://blog.gulflive.com/mississippi-press-news/2014/10/heavy_winds_blow_vt_halter_mar.html

Ports along the U.S. Gulf are suspending cargo operations in anticipation of Tropical Storm Isaac, which the National Weather Service said is expected to reach hurricane status when it hits shore late Tuesday, August 28, 2012. The ports of New Orleans, Gulfport, Pascagoula and Mobile will shut down until the storm passes. Mississippi River pilots ceased moving ships Monday morning, closing the river to deep-draft traffic until the storm threat passes. The Port of New Orleans’ administration building and cargo operations will be closed Tuesday and Wednesday.