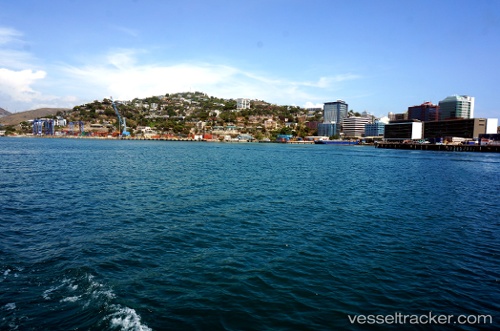 Five men were dead after entering an oxygen-starved compartment in the barge "Nivani Colossus" in Port Moresby on Nov 26, 2014. They were believed to have dropped unconscious and lost their lives after entering the compartment for an inspection of damage to the bow. But one man was believed to have survived after being given breathing help and heart resuscitation efforts. Three were employees of the construction company Nivani Ltd, and two were from Karavia village mid-way between Rabaul and Kokopo. The barge had suffered some damage in a beach landing recently and the men opened the hatch to one of the airtight compartments to inspect damage to the bow. One man survived the scene. Five were pronounced dead after attempts to revive them failed. Reports with photos: http://www.pngloop.com/2014/11/27/sight-five-unconscious-men-shocked-rescuers/#sthash.VeGaA6dS.dpuf http://www.pngloop.com/2014/11/26/five-die-rabaul-shipping-tragedy/#sthash.nOoDoCmd.dpuf

Authorities say they have rescued all 11 crew members of a barge that overturned off the coast of Papua New Guinea. Tug boat Go Rigel recovered all the crew members from a life raft 80 nautical miles northwest of PNG's capital, Port Moresby, just hours after a shipping distress call and emergency beacon was activated at 3.30am on Thursday. The Australian Maritime Safety Authority (AMSA) said two planes and helicopter assisted in the rescue. The cause of the incident is not known. AMSA said it was working with the Maritime Rescue Co-ordination Centre in Port Moresby to gather more information. AAP's attempts to contact PNG's National Maritime Safety Authority (NMSA) were unsuccessful on Thursday. Source : The Sydney Morning Herald