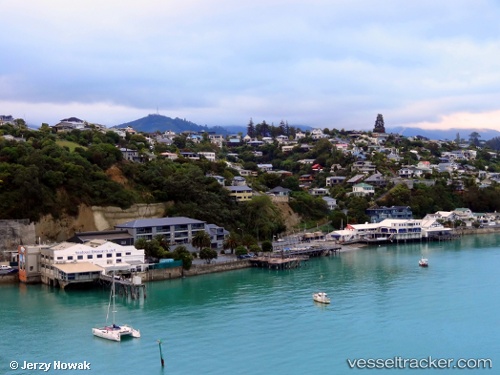 A luxurious "floating country house" style cruise ship was in Nelson on Saturday as part of its trip around the country. The 90.6 metre Caledonian Sky is on a circumnavigation of New Zealand, which started in Auckland and will end there on Wednesday. On Saturday morning a number of the 90 people on board disembarked the ship at Port Tarakohe in Golden Bay, where they had spent the night, and bused to Totaranui to tour the Abel Tasman. They were met by a coach at Kaiteriteri that brought them back to the ship, which had travelled to Nelson. Those who stayed on board spent the afternoon sightseeing, shopping and walking in the city, New Zealand agent for the Caledonian Sky Carole Brown said. "In the evening for the first time in Nelson we actually had wine tasting on board from Brightwater, and at about 9.30 they had a quartet from the Nelson Bays Harmony Chorus who came and sang. "People really enjoyed that, it was a nice way to finish their time in Nelson," she said. The tour group was mostly people from Britain, she said. The Caledonian Sky will go on to Vanuatu from New Zealand, where it comes each year, and tour the Pacific Islands. http://www.stuff.co.nz/nelson-mail/news/76208791/cruise-liner-stops-in-nelson

A new length record for ships at Port Nelson is a significant step forward, Port Nelson chief executive Martin Byrne said on October 5th, 2012. At 238 metres, the Olivia Maersk, which came through the Cut at midday on Oct. 4, 2012, is 14m longer than the previous record-setter, Algarrobo, which arrived earlier in the year. The port's ability to handle it meant that Maersk, the giant international container line, could increase its Nelson cargo-carrying capacity, Mr Byrne said. Port Nelson senior maritime staff went on board the Olivia Maersk in North Island ports to observe the way it handled.

What is thought to be the longest ship ever to visit Port Nelson made a brief call today (July, 10, 2012) - and gained the unofficial record by just 29cm. The Maersk container ship Algarrobo measures 225.09m. The previous longest ship the port can confirm was the much bigger Blue Marlin, the world's biggest heavy transport ship, which is 224.8m long but also 53m wide, and presented special challenges to pilots as it traversed the Cut at the entrance to the port in mid-2008. A special exclusion zone was set up for its arrival and departure, and crowds lined Wakefield Quay and hillside vantage points to watch it. http://www.stuff.co.nz/nelson-mail/news/7251524/Long-ship-makes-short-visit