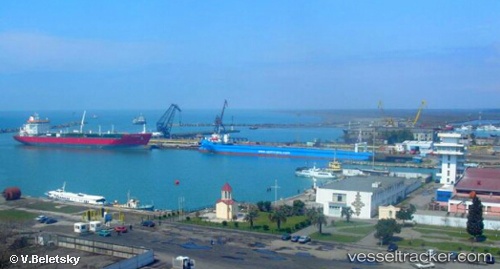 New marine terminal to be built in Poti port of Georgia

A new marine terminal will be built in the Poti, due to which the port will be able to receive 2.5 million tons more cargo per year. This was announced on February 4 by the Prime Minister of Georgia, Mamuka Bakhtadze, during the signing of the relevant agreement. The relevant agreement was signed between the U.S. Overseas Private Investment Corporation (OPIC) and the Georgian-American transport company PACE Group in Tbilisi.

APM Terminals Poti and Poti New Terminals Consortium have submitted a conceptual design for a first stage construction permit for the expansion of the Poti Sea Port, Georgia. The plans were received by the Ministry of Economy and Sustainable Development of Georgia. The project plan entails a 14.5-meter water depth at the 700-meter quay wall and 25 hectares of dedicated land for the bulk operation for yard and covered storage facilities for various cargo types, including grain, ore, and minerals.

APM Terminals Poti and Poti New Terminals Consortium signed a Memorandum of Understanding (MOU) for a USD 100 million dollar investment in a new bulk cargo terminal that can process 1.5 million tons of dry bulk cargo annually and generate new trade opportunities for customers in the Georgian transit corridor, the company said in its press release. The new terminal is expected to be built on APM Terminals Poti land and infrastructure and will entail the construction, development and operation of a new breakwater, dry bulk cargo terminal and related infrastructure to serve bulk cargo customers.