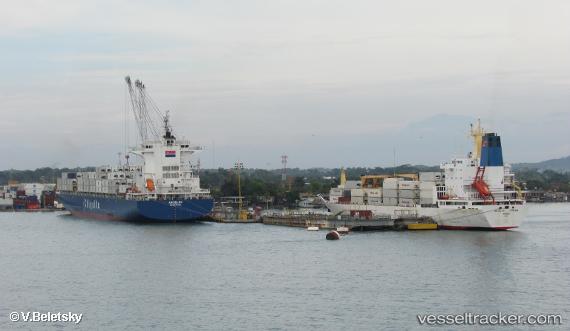 Chiquita Brands International Inc., is exporting from an upgraded Guatemalan port. During a Sept. 11 ceremony, the Charlotte, N.C.-based Chiquita celebrated the inauguration of a $30 million expansion and renovation of port facilities at Terminal Ferroviaria de Puerto Barrios in Guatemala. The Puerto Barrios expansion and renovation is part of Chiquita’s earlier announced reconfiguration of shipping rotations. Chiquita plans to replace its U.S.-Gulf shipping rotation with larger, more efficient vessels allowing for some costs and stowage capacity to be shared with third-party shipping partners, which plans to lower per-unit shipping costs for both parties, according to a news release. Through its Guatemalan subsidiary COBIGUA, Chiquita is the largest exporter of Guatemalan bananas and plantains and one of the port’s main customers, according to the release. Through more than 225 yearly container vessel calls, Chiquita imports and exports more than 125,000 containers of fresh fruit as well as refrigerated and dry cargo and other goods, according to the release. “For more than 100 years, Puerto Barrios has been a strategic point of embarkation and entry for Chiquita and Guatemala,” Ed Lonergan, Chiquita’s president and chief executive officer, said in the release. “We are particularly excited about the enhanced levels of service to our Chiquita and Great White Fleet customers that will result from this investment in expanded capacity, and the economic opportunities that this will generate for the local community.” Chiquita remains grateful to the Guatemalan people and the ceremony participation of Guatemala’s president Otto Pérez Molina, whose participation made the expansion possible, Lonergan said in the release. Chiquita shipped containers of donated medical equipment to Puerto Barrios in partnership with Charlotte’s Heineman Foundation and the Carolinas HealthCare System’s International Medical Outreach Program. Source: The Packer