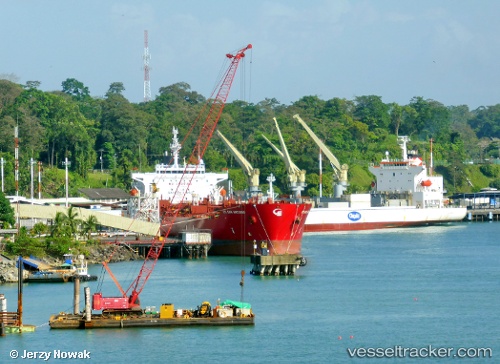 MSC Mediterranean Shipping Company, a global leader in transportation and logistics, is improving trade links between Costa Rica and northern Europe by adding a new direct call from the Port of Moin. On 16 June MSC Katya R. will be the largest vessel to call Moin Terminal in Costa Rica, launching a new era in cargo shipping for the port and for exporters using its facilities. MSC’s service will bring larger container ships with more capacity to carry refrigerated produce on transatlantic routes to European and Asian markets.

The inauguration of the delayed APM Terminals Moín yesterday (February 28) will enable products to be shipped on transatlantic routes to European and Asian markets without transhipment, the port operator stated in a release. “Without any doubt, we are inaugurating today a new era in international and intra-regional trade in Central America,” said Morten Engelstoft, CEO of APM Terminals, at the inauguration ceremony yesterday attended by the president of the Central American nation. The $1bn new port is built on a 40 ha artificial island. The terminal has a 650 m long pier and a container yard with the capacity to hold 26,000 teu, including power connection capacity for 3,800 reefers. Refrigeration is essential as Costa Rica is currently the world’s largest exporter of pineapples and third largest exporter of bananas.

Costa Rica Shipping Port Looking to Have a Big 2019

The Presidential House estimates that the new Moín terminal will serve up to 10 boats per week next year. The Dutch concessionaire APM Terminals was recently given the go ahead to start commercial operations. The first ship to arrive was the Captain Beatrice with 2,500 refrigerated containers. 300 of them went down to the port to be filled with national products to export. A few days later, the Polar Mexico unloaded and then loaded 700 containers of pineapple and banana going to northern Europe. The terminal is 97% done and will be formally inaugurated in February 2019. The number of ships served and services offered will gradually increase. This terminal will allow access to larger vessels and new routes.