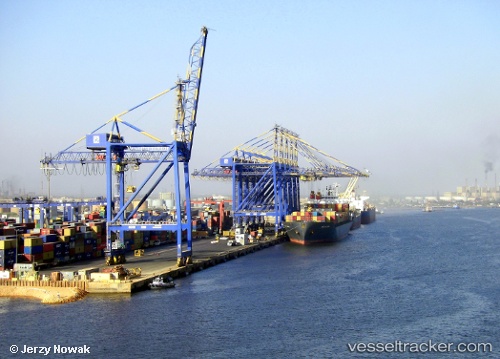 Chinese company Huaneng Fuyun Port and Shipping (HFPS), which operates berths three and four at Port Qasim , Karachi, has paid five months salary (from July 18 to November 18) to Pakistani dock workers in the port through two cheques of a total amount of Rs20.547 million. Sources in the Ports and Shipping told The Nation on Sunday that a deal was brokered at a meeting on the weekend between representatives of Huaneng Fuyun Port and Shipping (HFPS) and representatives of 1,751 dockers, social workers, human rights activists and trade unionists that brought to end the 109-day workers’ agitation. Hundreds of dockers staged sit-in outside the Karachi Press Club following a protest rally staged a day earlier the agreement.

Port Qasim dock workers continued their sit-in for the acceptance of their demands on the 40th consecutive day outside the Karachi Press Club. A sit-in camp had been established at the press club by the Port Qasim Authorities (PQA) Workers Union to press the authorities to accept their demands. They have been protesting against the PQA and a Chinese cargo management company.

Hundreds of affected dock workers of Port Qasim continued their sit-in on 33rd consecutive day of their protest. The sit-in camp was established by the Workers Union of Port Qasim CBA to protest against a Chinese loading company and non-payment of salaries. Responding to their protest, Chinese company Huaneng Fuyun Port & Shipping (Pvt) Ltd paid the workers six months’ worth of salaries but the company still owes four months’ worth of compensation. Labourers protested and chanted slogans against Chinese company and port officials during the protest on Saturday. An elderly labourer Shah Jahan fainted in camp but his colleagues refused to take him hospital until their demands were met.