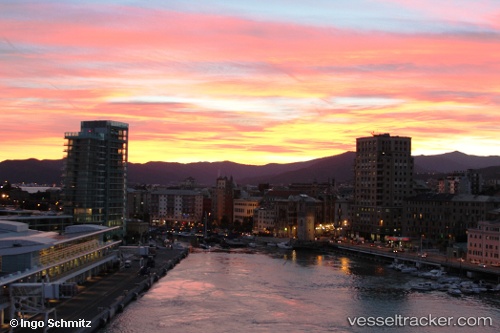 Exactly 15 years after landing in Southern Italy’s main container hub, APM Terminals has now decided to sell its 33% stake in the Medcenter Container Terminal based in Gioia Tauro. The company from now will be jointly owned by Contship Italia (Eurogate Group) and Gitaurco Ltd (Msc Group). Terms of sale and price were not officially disclosed. “The sale of our 33% share in Medcenter is based on a business decision to divest a non-core asset so we can focus on our core business” Tom Boyd, APM Terminals external communications director, explains to Splash. “Currently we are building Italy’s port of the future called APM Terminals Vado, a deepwater port in Savona (Northern Italy) that will serve supply chains for markets in Italy, Southern France, Switzerland and Bavaria (Germany)” adds Carlo Merli, Ceo of APM Terminals Vado. APM Terminals Vado will open in January 2018 with 800,000 teu annual capacity and a 17 meter depth to serve the last generation of container vessels. Few weeks ago APM also took over Reefer Terminal from GF Group, a port infrastructure located adjacent to the construction site of the Vado new terminal project. http://splash247.com/apm-terminals-offloads-gioia-tauro-container-hub-bets-savona-vado/

Costa Fascinosa to Be Named in Savona on May 6

Costa Cruises said the 16th ship in their fleet, the 114,500-ton Costa Fascinosa (Italian for "fascinating"), will debut on May 2, 2012 with a cruise from Venice to Savona (near Genoa) where it will be named on May 6. The 3800-passenger ship is currently in the final construction phase at Fincantieri's Marghera shipyard. The ship's official inaugural cruise will be an 11-night voyage from Venice on May 11, 2012.