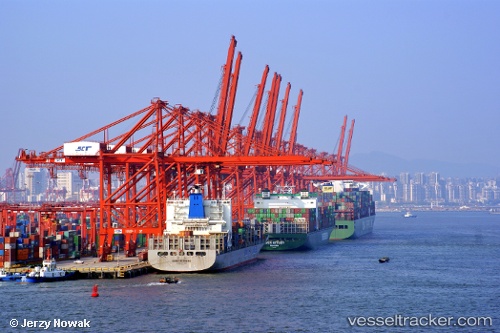 In the evening of Nov 10, 2017, an explosion and ensuing fire occurred in the containers stacked at the Yantian Container Terminal in Shenzhen. One or more containers’ bottom was burned through, probably the container was loaded with lithium batteries. The containers which suffered the explosion were to be shipped soon.

Shenzhen, China, has a new state-of-the-art cruise port as Prince Bay was inaugurated into service as the SuperStar Virgo sailed from the port on Nov. 12. The facility is a key component of the Shekou Cruise Centre (SCC), a comprehensive transportation hub with air, land, air and rail. Shenzhen is China’s fourth largest city by GDP and is located strategically in the Pearl River Delta near Hong Kong, Macau and Guangdong. About 200 people attended the opening ceremony, including management from Genting Hong Kong and Carnival Corporation. The development is located in Shenzhen’s Shekou Industrial Zone which is owned by China Merchant Shekou Industrial Zone Holdings (CMSK). The SCC development also includes museums, hotels, commercial offices and residential spaces. Pictures at http://www.cruiseindustrynews.com/cruise-news/16001-prince-bay-cruise-facility-in-shenzhen-opens.html