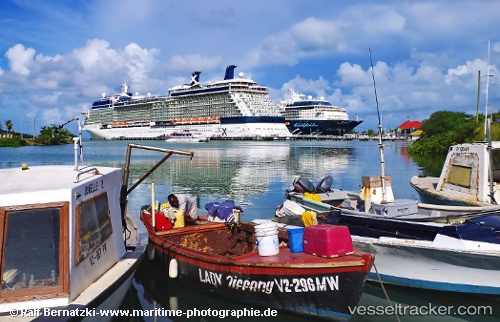 Chinese investments will drive a significant pier upgrade for cruise ships in Antigua and Barbuda in the coming years. Once the China Construction Engineering Company is finished with the destination’s new state-of-the-art airport (this April) they will turn to sweeping the harbor, before a major new port project in Antigua. “We will enhance the cargo pier and add a new cruise berth,” said Nathan Dundas, president of the Antigua and Barbuda Cruise Tourism Association. “It will be significantly, bigger than the pier we have now and geared toward Oasis-class vessels.” The agreement signed is valued at $200 million as Antigua is already seeing 700,000 passengers this year, up 20 percent from 2014. Another agreement with the Caribbean Development Fund has given Antigua loan and grant money to go in and development downtown St. John’s, repairing roads, updating the taxi area and painting various buildings. An updated downtown, new airport and new cruise pier for megaships will help transform Antigua’s position in the Caribbean marketplace. “Once it all comes together it will put Antigua back into the number one position, and competing with St. Maarten (for cruise calls),” said Dundas. Barbuda had a record number of cruise calls, 15, for the 2014-2015 season. Most ships visiting the un-developed destination were small niche cruise lines, including Club Med, Hapag-Lloyd and Windstar. Only 1,100 people live on the island. http://www.cruiseindustrynews.com/cruise-news/12336.html

Antigua and Barbuda has notified the International Labour Office (ILO) that it has ratified the Maritime Labour Convention 2006 (MLC) – the “seafarers’ bill of rights”. It is the 17th ILO state to ratify the convention, and the third Caribbean country to do so. Antigua and Barbuda ranks in the top 20 flag states, and over 90,000 seafarers worldwide serve on vessels carrying its flag. The convention sets out minimum standards and fair working conditions for seafarers. It will come into international law once it has been ratified by 30 countries and representing at least 33 per cent of the world’s shipping. The latter condition has already been exceeded. There are hopes that the 13 further countries needed to sign up will do so this year in time for the convention to come into force in 2012. http://www.itfseafarers.org/maritime_news.cfm/newsdetail/6322/region/6/section/0/order/1