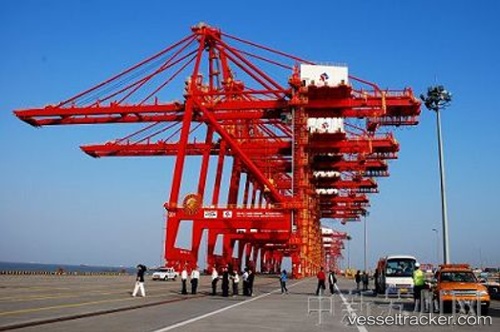 Kalmar, part of Cargotec, and Rainbow-Cargotec Industries Co., Ltd (RCI) celebrate today the opening of a new jetty in Taicang, China and introduce the latest Kalmar RTG developments. The new jetty will support Kalmar’s business growth in the Asia-Pacific region by enabling the deliveries of fully erect Kalmar yard cranes from RCI. The jetty can berth vessels of up to 50,000 DWT capacities. It is 361 metres long and the water depth is 12 metres. http://www.hellenicshippingnews.com/kalmar-and-rainbow-cargotec-industries-celebrate-the-opening-of-new-jetty-in-china-and-showcase-the-latest-rtg-developments/

Kalmar, part of Cargotec, and Rainbow-Cargotec Industries Co., Ltd (RCI) celebrate the ground breaking of a new jetty at RCI’s facilities in Taicang, China today. RCI is a joint venture established in Taicang, Jiangsu Province, China, in 2012 between Cargotec Corporation and Jiangsu Rainbow Heavy Industries. It is responsible for the production of Kalmar rubber-tyred gantry cranes (RTGs) and ship-to-shore cranes (STSs) for global markets. Kalmar has decided to invest in a new jetty to increase RCI’s import and export capacity with shorter shipping time, higher efficiency, and lower logistics costs. In addition, the new jetty will enable fully erect STS crane deliveries from RCI, which supports Kalmar’s STS business growth in the Asia-Pacific region.

The disputes between shippers and Taicang Port have intensified, as a number of shippers still haven’t reached agreement with the port to release the cargo in the detained containers of defunct Nan Tsing Container Lines. A number of furious shippers protested at Taicang Port’s Zhenghe Xinggang Container Terminals this morning. They also blocked the main entrance of the terminal with container trucks. Taicang Port detained around 140 Nan Tsing containers following the company’s decision to suspend operations. It asked shippers to pay RMB15,000 to RMB20,000 ($2,300 to $3,100) per container to release the cargo in the beginning. Later the port lowered the price to RMB5,000 ($785) per container, however, the shippers are requesting the port release the cargo without additional charges. When contacted by Splash, a spokesperson from Zhenghe Xinggang Container Terminals said the company is still negotiating with the shippers and doing its best to work out a solution for both parties. http://splash247.com/taicang-port-blockaded-in-dispute-over-nan-tsing-containers/