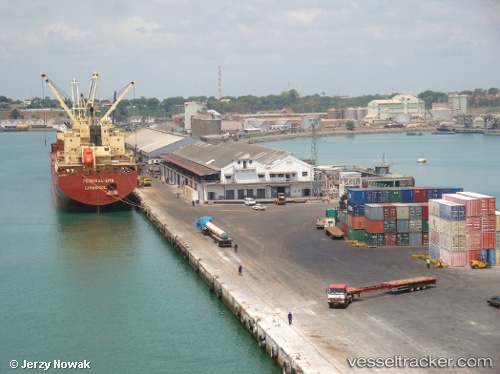 Expansion works on the Takoradi Port have started with the construction of a multipurpose on-dock Atlantic Container Terminal. The project will see the port basin being dredged to create a 16-metre depth and land reclamation for the building of five new berths to hold bigger capacity vessels. A visit to the Takoradi Port in the Western Region revealed that the contractors were casting the foundation stones for the quay wall to herald the expansion project at the port. The project, being developed by Ibistek Ghana Limited at a cost of $475 million, marks the first time a wholly owned Ghanaian firm has been engaged in port development in the country. The Atlantic terminal, which will be the major development in the history of the Takoradi port when completed, will have a cargo holding space of one million twenty-footer equivalent units (TEUs), an upscale from the average container traffic of about 55,000 TEUs a year.

he Takoradi Port, which is undergoing expansion in order to increase vessel calls has been audited by officials from the United State Coast guard as part of their routine auditing of port facilities. After commending the Tema port for improved security, the United State Coast guard team also visited the Takoradi port to assess the level of its security. The audit is in line with the International Ship and Port Security (ISPS) code, which came into being in the early part of 2004 and aimed at implementing and enforcing high security measures to prevent the act of terrorism and other security threats in ports and their facilities. The team was received and briefed by the Director of Takoradi Port, Ebenzer Afedzi and the Harbour Master, Captain Richmond Quayeson. They visited the various entry and exit points of the Takoradi port to assess control mechanisms put in place by Ghana’s Port Authority. The team observed a high and full compliance on the part of Takoradi Port. https://www.ghanaweb.com/GhanaHomePage/business/United-States-coast-guard-team-assesses-security-at-Takoradi-port-569922

The Ghana Ports and Harbours Authority (GPHA) has offered a concession to IBISTEK Limited, a Ghanaian firm towards the development and operations of a container and multi-purpose terminal at the Port of Takoradi. This is part of the Port Authority’s Master Plan and development efforts to equip the Port of Takoradi for future demands. The concession related project works and installations will be executed at a cost of $370million. The terminals, in the long term, could have the capacity of handling One Million Twenty Equivalent Unit (TEUs) containers in line with the GPHA’s projected growth for cargo through the Port of Takoradi. The concession term is 25years. According to IBISTEK Ltd, funding for the facility is expected to come from various lending agencies to be led by the African Development Bank (AfDB). There are also intentions to approach the Ghana Infrastructure Investment Fund (GIIF) to participate in the financing.