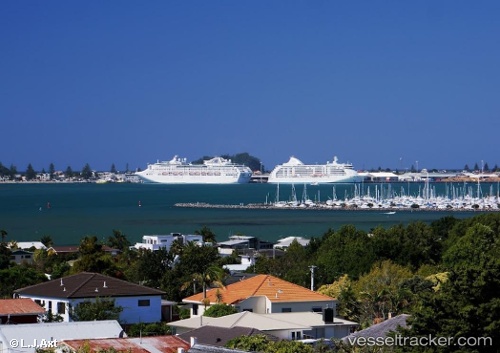 A final ‘bon voyage’ next Monday

Tauranga locals are being encouraged to help send off the 2016/17 cruise ship season in style when the final ship setting sail next Monday. The 80th and final cruise ship of the season is Oceania Cruises vessel Sirena – a 181m long ship which has a gross tonnage of 30,227 and can accommodate 684 passengers and 400 crew. She will be making two visits to Tauranga – the first taking place this Saturday, with Sirena arriving in port at about 9.15am and scheduled to depart at 7.30pm, followed by a return visit next Monday from 6.45am to 7pm. This latest cruise ship season has been particularly busy, with 80 ships, 150,000 passengers and more than 64,000 crew members visiting Tauranga since last October. It has also been the first season for cruise ships – four in total – staying in port overnight. - See more at: http://www.sunlive.co.nz/news/152380-a-final-bon-voyage-next-monday.html#sthash.RAhCy4ZC.dpuf

Hamburg-Sud has become the second shipping line to confirm it will introduce a big ship service to Tauranga, taking advantage of the port's increased depth following its extensive dredging programme. The seasonal weekly service is scheduled to commence on March 7. The first big ship to visit New Zealand, the 9600 20 foot container equivalent unit (TEU) Aotea Maersk, berthed in Tauranga last October, initiating Maersk Lines' South America-New Zealand-North Asia service. Full details of the new Hamburg-Sud service are not yet available, but it is understood it will operate the service with slightly smaller 7200 TEU vessels, during the kiwifruit harvest season. "We are doing a peak season service for 21-22 weeks as a top-up for reefer capacity for the perishable exporters," said Simon Edwards, Hamburg-Sud New Zealand general manager commercial. The vessel would be routed to Port of Tauranga as part of its South America to North Asia service, with North Asian calls at Taiwan, Hong Kong, China and South Korea. http://www.nzherald.co.nz/the-country/news/article.cfm?c_id=16&objectid=11789353

Thursday Jan 12, 2017 - Port of Tauranga's new megaship service to North Asia has lured Australian exporters and was expected to boost containers handled by the port to a record-breaking total of more than one million this year. ''We were all a bit nervous,'' port chief executive Mark Cairns said about the $350 million spent dredging shipping channels to make Tauranga the first New Zealand port capable of handling megaships. But the dredging, which doubled the size of container ships able to berth at Tauranga, looked like it was paying off with the port entering a new era. Maersk Line's new direct service to northern Asia ports involved Port of Tauranga becoming a trans-shipping hub for other New Zealand ports. Cargo was unloaded from smaller vessels and loaded onto the new generation container ships capable of carrying up to 9600 20ft-equivalent containers. http://www.nzherald.co.nz/bay-of-plenty-times/news/article.cfm?c_id=1503343&objectid=11780537