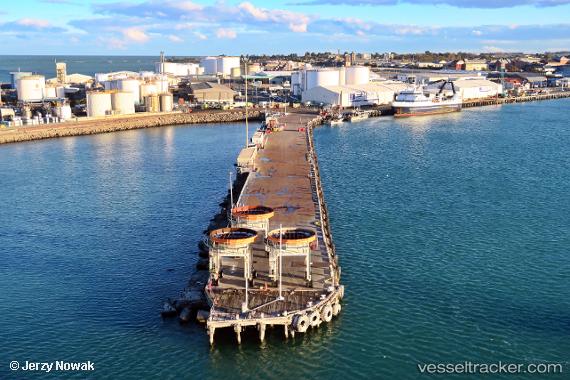 A massive container ship will return to Timaru on Sunday after the world’s largest logistics company confirmed weekly visits to the port. This follows a trial late in May when the 286.5 metre long and 40m wide, Rio de Janeiro’s berthing acted as a test run for similar sized ships to dock in Timaru after a $2.5 million project to widen the port’s inner breakwater entrance from 90m to 140m. PrimePort chief executive Phil Melhopt confirmed the 6pm Sunday call of the giant vessel and said it was another demonstration of the forward steps the port was taking. “Maersk shipping line have been very consistent since the Timaru container terminal started their operations in 2014 and will be calling in at Timaru again,” he said. “They have recently announced their Southern Star Rio Class will form part of their service into Timaru. They’re going to call here going forward.

The world’s largest shipping and logistics company looks set to drop its anchors in Timaru following a visit from the largest ship ever to berth at the port. The town’s port would definitely see more ships like the massive Rio de Janeiro, which berthed here on May 26, if that trial run proves successful, Maersk says. Maersk Oceania area product manager Greg Paradine said it had recently customised its services to accommodate New Zealand ports such as Tauranga, Napier, Lyttelton and Port Chalmers. Timaru could be next on that list after the Rio de Janeiro’s stop over late last month, he said.

Five days after a fire broke out aboard the fishing vessel Dong Won 701 at the port of Timaru, South Canterbury, responders are still working to extinguish the last of the flames. The Korean-owned Dong Won caught fire at a pier in Timaru on Monday night. All 60 crewmembers on board managed to escape the vessel safely, though several instances of smoke inhalation were reported. As of Tuesday, burning nets and fuel continued to hamper firefighting efforts, and rather than risk impairing the vessel's stability by flooding her with firefighting water, responders opted to let the blaze burn itself out while providing boundary cooling of the hull. One of the harbor's two tugs assisted this effort with its firefighting monitor.