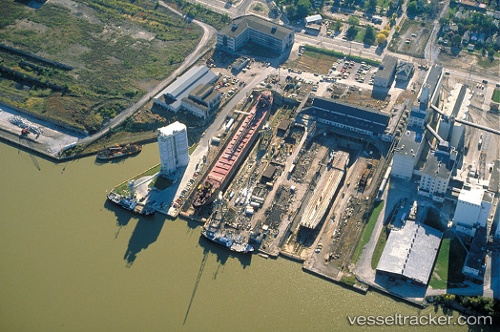 Like the first robins, Toledo’s first overseas ship of the season is a sure sign of spring — and like many other such signs this year, the M.V. Floragracht arrived a little late. The freighter docked at the Toledo-Lucas County Port Authority’s general-cargo docks Friday morning to unload several pieces of heavy equipment from Europe. But because it was slowed by ice earlier in its voyage through the St. Lawrence Seaway and eastern Lake Erie, and by fog Thursday afternoon in Maumee Bay, port authority officials said there was no time to have the usual first-ship welcoming ceremony for the Dutch-flagged Floragracht and its crew. Joe Cappel, the port authority’s vice president of business development, estimated the Floragracht’s overall delay at several days. He said he was not sure what impact a later-than-average Seaway opening — April 2 instead of a normal late March start — may have had on its schedule. Read more at http://www.toledoblade.com/local/2015/04/11/First-freighter-like-spring-arrives-later-than-usual-1.html#JjPCZCG1gq3K3WvP.99

The M.V. Isa, became the first overseas vessel to call on Toledo during the 2013 Great Lakes shipping season when it arrived on March 29, 2013. The M.V. Isa, registered in Cyprus and operated by Polska Zegluga Morska P.P., based in Szczecin, Poland, is “one of the earliest first ships that we’ve had in recent years,” said Mr. Cappel, who expressed hope that the early ship is a harbinger of a robust shipping season at the local port. Read more at http://www.toledoblade.com/local/2013/03/30/Skipper-of-1st-overseas-ship-of-the-season-praises-Toledo-port.html#9AelIXh3wrd0C7Js.99 Read more at http://www.toledoblade.com/local/2013/03/30/Skipper-of-1st-overseas-ship-of-the-season-praises-Toledo-port.html#9AelIXh3wrd0C7Js.99

The Toledo-Lucas County Port Authority Monday morning formally welcomed the first oceangoing freighter of the 2011 shipping season to the Port of Toledo. The M.V. Daniella, registered in the Netherlands, arrived Friday from Thailand carrying a “project cargo” of machinery for the BP/Husky refinery in Oregon. Cargo tonnage across the Toledo docks increased by 8.2 percent last year, to 10.86 million tons, buoyed primarily by increases in coal and iron ore traffic. Twenty-two oceangoing vessels called in Toledo during 2010, up from nine the year before.