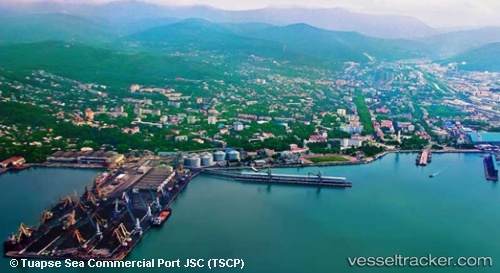 In 2017, Tuapse Sea Commercial Port JSC (TSCP, a company of UCL Holding) invested RUB 350.4 million (USD 6.1 million) in the development of its port infrastructure, which represents a 32% year-on-year increase. In 2017, Tuapse Sea Commercial Port continued implementation of its investment programmes focused on maintenance of its production capacity and further development of the port. Under its equipment upgrade programme the company acquired a full-circle Mantsinen K200 (ЕS) crane with two 6 cbm clamshell buckets, a Liebherr front-end loader, 4 grabs including 2 radio remote control grabs of 18 cbm each as well as other attachments for wheel-mounted equipment and portal cranes. Besides, last year saw allocations for procurement of two fork-lift coupling units that are to be put into operation in 2018. In the reporting period, TSCP spent RUB 232.2 million on purchase of handling equipment.

Dec 24 (Reuters) – A leak on a major Russian oil pipeline caused a spill in the Black Sea near the port of Tuapse on Wednesday where officials said stormy weather was hampering efforts to assess and respond to the mishap. “Some quantity of oil has spilled into the sea,” Sergei Proskurin, first deputy captain of the port of Tuapse, told Reuters. He said the size of the spill was unclear and that emergencies services were working to deploy temporary floating barriers to contain the spill but were being delayed by the stormy conditions. Tuapse is a busy industrial and oil port but is located close to many Russian Black Sea resorts. It is just 118 km (73 miles) from the town of Sochi which hosted the 2014 Winter Olympics. Two Tuapse residents told Reuters they had seen oil in the sea and in a river along which the pipeline runs towards the Tuapse oil refinery operated by state oil firm Rosneft .

RN-Bunker LLC, Rosneft subsidiary, has put into operation its state-of-the-art bunkering tanker at port Tuapse. According to Rosneft press center, cargo capacity of the vessel named RN Tuapse is 7,000 t. The tanker meets all safety requirements and complies with all international shipping conventions. RN Tuapse is the fifth bunkering tanker which was jointly put into operation by Rosnefteflot CJSC and RN-Bunker LLC under Rosneft programme on the development of the company’s bunkering business. RN Magellan, RN Taurus, RN Polaris and RN Olimp have been providing bunkering services from 2011. Source: Portnews