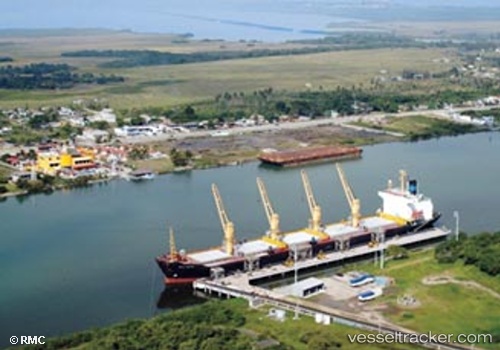 The successful arrival and departure Monday night of the Hammonia Venetia at the Port of Tuxpan, the first ever ship to dock there, was more than just the inauguration of a new Mexican port. It also ushered in what could be a fierce fight among Mexican ports on the Gulf Coast. Tuxpan Port Terminal SA hopes to become the main pathway for goods heading for Mexico City. But the port faces steep challenges from Altamira 125 miles to the north and Veracruz 185 miles to the south, both of which boast more weekly services and volume. The 210-acre port, which cost $370 million to build and is owned by SSA Marine of Seattle, including the land, hopes that its state of the art port equipment and position as the closest port to the Mexican capital, linked by a newly built highway, will encourage shippers to shift cargo to Tuxpan and away from its two rivals. http://www.joc.com/port-news/international-ports/new-competitor-mexico%E2%80%99s-gulf-coast-container-market_20160708.html

CMA CGM will be the first shipping line to call Tuxpan Port Terminal (TPT), on the Atlantic coast of Mexico, with the Victory Bridge service connecting Tuxpan with the US and Europe. The $375m, 710,000 teu terminal is the first automated port to begin operations in Mexico. Tuxpan Port Terminal (TPT) is a subsidiary of Seattle-based SSA Marine. The 2010-built 4,200 teu vessel CMA CGM Hammonia Venetia will make the maiden call at Tuxpan on 4 July. The port’s 556 m long quay with a depth alongside of 15 metres makes it the only terminal on Mexico’s Gulf Coast able to receive New-Panamax vessels up to 14,000 teu. It was fully completed in 1Q 2016. It also features 240 reefer plugs, a dedicated customs and agricultural inspection facility and a 33 hectare-yard to receive some 50,000 vehicles per year and has four super post-panamax cranes with an outreach of 23 containers wide. Tuxpan is located on the Atlantic coast of Mexico, some 240km from the capital city in between the ports of Vera Cruz and Altamira, which are also on the CMA CGM Victory Bridge service. http://www.seatrade-maritime.com/news/americas/mexicos-tuxpan-port-terminal-starts-operations.html

International Container Terminal Services (ICTSI), the Philippines’ largest port operator, has announced that it has acquired Mexico-based container terminal operator Terminal Maritima de Tuxpan SA de CV (TMT) for $55.4m from Mexico’s logistics and transportation company Grupo TMM SAB and its subsidiary Inmobiliaria TMM SA de CV. TMT has a concession to construct and operate a container terminal in the Port of Tuxpan, Mexico and is the owner of the real estate where the terminal will be constructed.