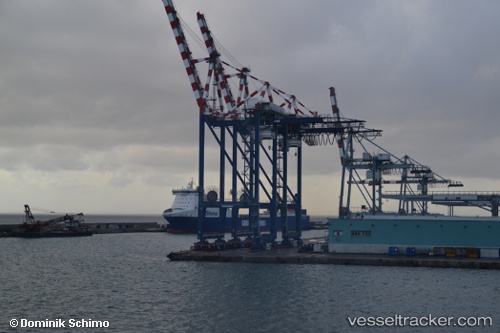 Terminal operator APM Terminals (APMT) has released a video of the final three ship-to-shore (STS) cranes arriving at the Vado Gateway terminal, which it hopes will be the next major logistics hub for the Mediterranean and Europe. The Vado Gateway terminal is scheduled to open on December 12, 2019, and will be built with a 700-meter deep-sea berth specifically to handle the latest Ultra Large Container Ships (ULCS), as well as an automated gate and stacking area. APMT announced the inauguration date in July 2019 – a story PTI reported on at the time. Located in the Vado Ligure Port Complex in the northwest of the country, it will be the first semi-automated port in Italy and be integrated with an already existing reefer terminal.

The first stage of the new semi-automated container terminal in Vado Ligure in Italy will launch on December 12 capable of handling the largest boxships afloat today. It is expected to increase competition among ports in northern Italy. The new infrastructure jointly owned by APM terminals (50.1%), 40% by Cosco Shipping Ports and 9.9% by Qingdao Port International Development will start operating in its first phase with a quay length of 450 m, 16 m draft and four ship-to-shore cranes handling ships of up to 23 rows across. The second phase will be completed in the third quarter of 2020 giving a quayside length of 700 m, five ship-to-shore cranes and an annual capacity of 860,000 teu.

APM Terminals has concluded an agreement with China COSCO Shipping Ports for the sale of a minority share in a new joint venture created for the APM Terminals Global Terminal Network’s operations in Vado, Italy. A similar agreement has been completed with Qingdao Port International Development Co Limited, a wholly-owned subsidiary of Qingdao Port International Co Ltd, which shall become an indirect minority shareholder in the joint venture. The agreements include interests in both the existing Reefer Terminal in Vado and the new 800,000 teu capacity deep-water terminal currently under construction at the Port of Vado. http://www.portstrategy.com/news101/world/europe/apm-terminals-brings-cosco-onboard-at-vado