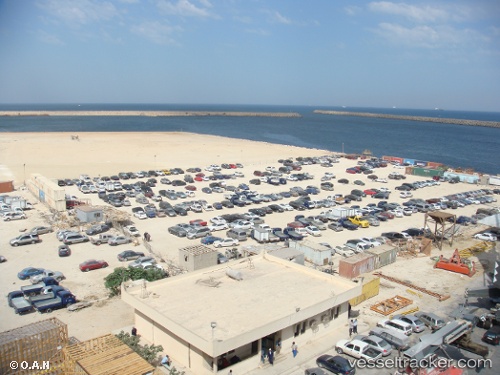 The commercial port in Libya’s second city Benghazi is working round the clock three years after reopening, attempting to raise revenues for its restoration and expansion. The port was caught in the crossfire as rival factions battled for control of Benghazi from 2014 in a conflict that left parts of the eastern Libyan city in ruins. It suspended operations as the main gate and some buildings were destroyed and the roads strewn with shells. Forces led by Khalifa Haftar eventually declared victory in Benghazi in 2017. Repairs and reconstruction have been limited — two out of three damaged tug boats are still out of service. But the port is now doing brisk business and trucks loaded with cars and containers carrying foodstuffs, motor oils and other goods can be seen streaming out of the main gate near the city center. Port manager Yzaid Bozraida said monthly revenues stood at more than seven million Libyan dinars ($4.9 million) before the war, though the income had not been used to develop the port.

A fuel tanker docked at Benghazi port in eastern Libya on Monday, Oct. 9 for the first time since being closed in 2014 due to fighting between rival factions. A tanker arrived from the capital Tripoli carrying 13,000 tonnes of petrol to ease fuel shortages in Libya’s second-largest city. The port does not export oil but imports gas and some petroleum products for domestic consumption as well as general cargo. Like Benghazi’s airport the port had been closed since 2014 because of a conflict between forces loyal to eastern-based commander Khalifa Haftar and an alliance of Islamists and other opponents.

Benghazi’s commercial port officially reopened on Oct 1, 2017) after a three-year closure due to fighting betweenrival factions in the east Libyan city,. To mark the opening, Abdullah al-Thinni, Prime Minister of a government based in the east, arrived on board a tanker sent from the eastern city of Tobruk The port does not export oil, but imports gas and some petroleum products as well as general cargo. Port manager Abdulazim Al-Abbar told Reuters: “Today Benghazi port opened and a tanker from Tobruk entered as a message to the world that the port is safe and we are ready to receive tankers. The port closed in 2014 due to the conflict between forces loyal to eastern-based commander Khalifa Haftar and an alliance of Islamists and other opponents. Haftar declared victory in early July, though isolated skirmishes continued.