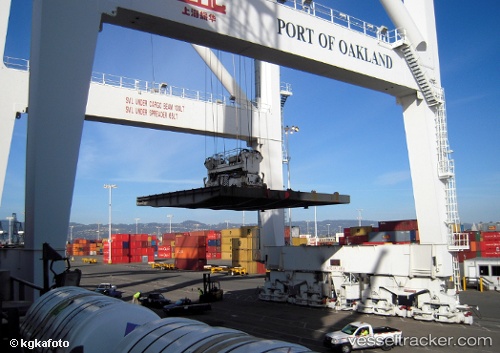 Four ship-to-shore cranes at Oakland International Container Terminal (OICT), the busiest terminal at the Port of Oakland, are 27 feet taller following completion this week of a year-long, crane-raising project. The fourth and final raised crane went back into service yesterday and is ready to serve larger ships with containers stacked high above vessel decks. Oakland already works the biggest containerships that call North America. Stevedoring Services of America (SSA) operates OICT and managed the crane-raising project in partnership with the Port of Oakland.

(Bloomberg) — A federal judge struck down a local ban prohibiting companies from transporting coal though an Oakland, California, export terminal that U.S. miners see as a key link to overseas markets. The ban enacted by the city in 2014 violates a development agreement, U.S. District Judge Vince Chhabria said Tuesday in a 37-page ruling. As demand for coal in the U.S. declines, miners depend increasingly on overseas markets. Yet Wyoming and Montana’s Powder River Basin, home to the nation’s largest reserves, is largely cut off from the world market without West Coast ports.