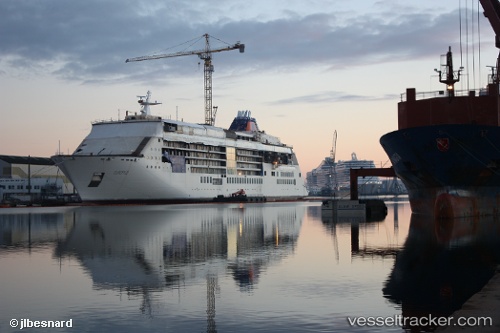 Fourth Edge class ship under construction. The first steel cut for the CELEBRITY ASCENT was celebrated on November 17, 2021 at the Chantiers de l’Atlantique in Saint Nazaire, France. It is already the fourth Edge class ship for Celebrity Cruises – after the CELEBRITY EDGE, CELEBRITY APEX and CELEBRITY BEYOND. The ships are each 306 meters long and measured with approx. 130,000 gross tons. A special feature of these cruise ships is the so-called Magic Carpet, a vertically movable deck on the starboard side. The CELEBRITY ASCENT is expected to be completed by the second half of 2023. Full article: https://www.cruisedeck.de/erster-stahlschnitt-fuer-celebrity-ascent/

Sodraco International, a French subsidiary of Jan De Nul Group, has signed a contract to transport and install 80 offshore wind turbines on the Saint-Nazaire offshore wind farm offshore France. The contract was awarded by Parc du Banc de Guérande, a joint venture between the French renewable energy company EDF Renewables and the Canadian energy infrastructure company Enbridge. It is the first offshore wind contract in France for Jan De Nul. “We are excited to contribute to the further development of renewable energy, and offshore wind in particular, in France. Next to that we are looking forward to working again with EDF Renewables and to confirm our skills and competencies by making the installation of the Offshore Wind Turbines in collaboration with GE a great success,” said Philippe Hutse, offshore director at Jan De Nul Group. The turbine installation works are planned to commence in spring 2022 and will be completed by the end of 2022.

Celebrity Apex to offer new and longer European voyages in 2020