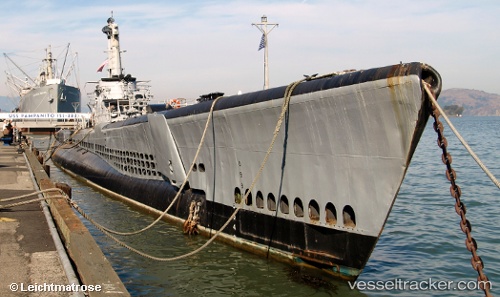 The number of coronavirus cases aboard the USS 'Kidd' rose to 64 as the Navy destroyer pulled into port at San Diego on April 28, 2020, to get medical care for the crew and to disinfect and decontaminate the ship. The 'Kidd' was the second Navy ship to have an outbreak of the disease while at sea, the other being the USS 'Theodore Roosevelt', an aircraft carrier that has been docked at Guam for a month and has more than 900 sailors with confirmed cases of COVID-19, but the entire crew has now been tested. The Navy has moved swiftly to get the 'Kidd''s crew ashore. That was a point of contention with the 'Roosevelt', whose skipper, Capt. Brett Crozier, felt compelled to write to several other commanders pleading for more urgent Navy action to protect his crew of nearly 5,000. Crozier was then relieved of command for what the Navy's top civilian official at the time, Thomas Modly, called poor judgment. Modly resigned several days later, and the Navy is now seeking higher-level approval to reverse his move and restore Crozier to command. The Navy said that 63% of the 'Kidd''s crew of more than 300 had been tested as of April 28. One sailor was medically evacuated to the United States on April 22 after experiencing shortness of breath. Fifteen were transferred to another ship with a medical facility for closer observation of symptoms. Sailors being removed from the 'Kidd' at San Diego will be isolated with twice-daily medical screenings. Crew members who have tested negative will enter quarantine for a period of observation, with military health professionals monitoring them for symptoms. Also, a small contingent of sailors who tested negative will remain on the ship for essential services and deep cleaning. The cleaning is expected to take two weeks. The destroyer had been off the Pacific coast of Central American doing counter-narcotics operations. The Navy said no deployed ships currently have known coronavirus cases aboard. 13 ships that previously had one or more active cases while in port have zero cases now.

Matson, Inc., a leading U.S. carrier in the Pacific, and General Dynamics NASSCO shipyard christened the largest combination container/roll-on, roll-off (“con-ro”) ship ever built in the United States in a ceremony at the NASSCO shipyard in San Diego, CA on Saturday, June 15. The new vessel is named ‘Lurline,’ an iconic name in Matson’s long history, dating to the construction of Captain William Matson’s first ship of that name in 1887. Four more ships were given the name in subsequent years; this vessel will be the sixth. The new Lurline is the first of two new ships being built for Honolulu-based Matson by NASSCO at a total cost of approximately $500 million for the pair, and the third of four new vessels that Matson will put into service during 2018, 2019 and 2020. Named in honor of the ocean deity revered in the native Hawaiian culture, Matson’s two “Kanaloa Class” vessels under construction at the NASSCO shipyard are being built on a 3,500 TEU* vessel platform.

A cybersecurity attack at the Port of San Diego has disrupted IT systems and resulted in limited functionality. In a statement on 26 September, CEO Randa Coniglio said the port first received reports of the disruption on Tuesday 25 September and is now working to minimise disruption. He stated there may be “temporary impacts on service to the public”, particularly “in the areas of park permits, public records requests, and business services” but did not provide details of any impact on scheduling and cargo. Mr Coniglio said: "The Port of San Diego has experienced a serious cybersecurity incident that has disrupted the agency's information technology systems.” http://www.portstrategy.com/news101/world/americas/cyber-attack-leaves-san-diego-systems-down