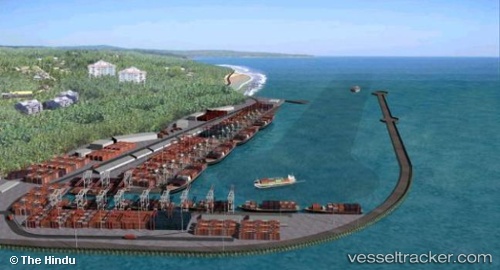 Adani Group’s ports arm, Adani Ports and Special Economic Zone Ltd (APSEZ), has started construction of the first berth at the country’s international transhipment project of deep-water multi-cargo port at Vizhinjam in Kerala. The project will be Kerala’s first-ever deep-water container transhipment port, with a deep draft of 20.5 meters and the first phase of the berth being constructed will be 800 metres in length.

The Vizhinjam Port received its first container ship on Tuesday, but the event also exposed the shortcomings of this small port. The port lacks a tug to guide ships in and cranes for off-loading large containers from the ships. It is understood that the port officials placed these issues before Ports Minister K Babu, who visited the port on Tuesday. The container vessel, MV Karuthal, arrived here on Tuesday morning as part of a trial run at various small ports in the state. It docked at the new wharf shortly after 12 noon. According to shipping agents Blue Sky Ports Services Pvt Ltd, the ship carried 94 containers. Captain Zaw Win Thein leads a 15-member crew on the Trans Asia Line vessel. The ship arrived here from Dubai via Beypore and will leave for Kollam at 8 am on Wednesday. Its long journey will end at Kochi, where the containers will be off-loaded. http://newindianexpress.com/cities/thiruvananthapuram/article1509317.ece