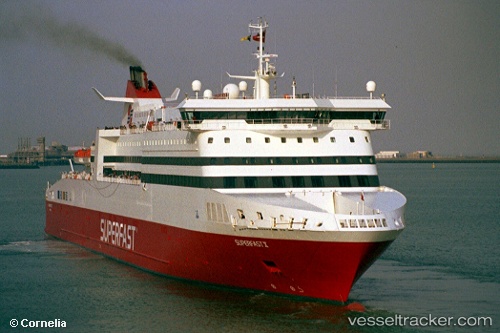 Stena ferry to be converted back to overnight ferry

The 'Stena Superfast X' has left Belfast for Piraeus in the evening of March 3, 2020, for a refit and conversion back into an overnight ferry. The last commercial voyage for Stena Line was the 11:30 a.m. sailing from Cairnryan. The ferry has been chartered to Corsica Linea and will be renamed 'A Nepita'. In Piraeus she will be fitted with around 100 additional cabins on Deck 8 and transformed back into a night ferry. She was originally conceived and built as an overnight ferry for Superfast Ferries. The Corsica Linea charter is a long-term arrangement with Stena Line sister company Stena RoRo. The deal is also thought to include an option to purchase the vessel outright. She was replaced in the Stena Line fleet by the 'Stena Estrid' in January. Since then she has acted as a relief vessel on the Belfast – Cairnryan, Rosslare – Cherbourg, and Dublin – Holyhead routes. She originally joined Stena Line in 2015 as a replacement for the 'Stena Nordica' on the Dublin – Holyhead route. The ‘Stena Nordica’ no longer had sufficient passenger capacity for the route she served, especially after Stena Line terminated the seasonal Dun Laoghaire – Holyhead HSS service.