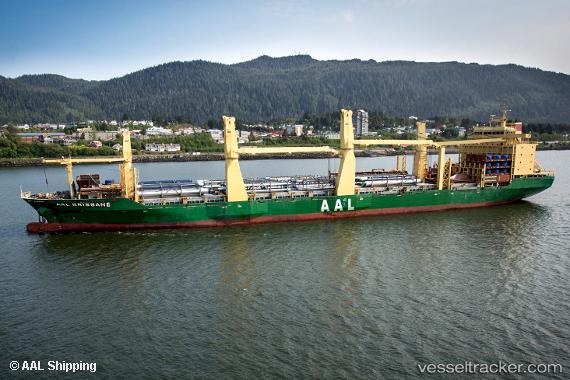 Found to be infested with plague insects, NZ

General cargo vessel AAL Brisbane on arrival to Wellington, NZ, on Nov 18 2012, was found to be infested with plague soldier beetle Chauliognathus lugubris, a native of south-western and south-eastern Australia named for its habit of forming huge mating swarms and with potential to be harmful to New Zealand insects, or carry diseases and other pests. The AAL Brisbane, which arrived in Wellington to pick up a cargo of logs, was targeted for a full inspection on arrival by the Ministry for Primary Industries after a recent spate of live beetle finds on vessels arriving from Melbourne, the ministry said in a statement. Vessel left Wellington on Nov 20 and on Nov 22 arrived to Tauranga. As of morning Nov 23 vessel was docked in Tauranga. Maritime Bulletin http://www.odin.tc

A wayward freight ship is being detained in Wellington after a near-collision at Pencarrow. The AAL Brisbane, understood to have been carrying pulp from Melbourne, veered ''closer than it should have'' to the rocks at Pencarrow as it arrived at the harbour entrance shortly after 2pm on Sunday, Wellington harbourmaster Mike Pryce said. It was detained by Maritime New Zealand when it docked at CentrePort. An investigation will look into its course, and questions around its navigation equipment. More at http://www.stuff.co.nz/national/7484382/Ship-held-after-near-collision