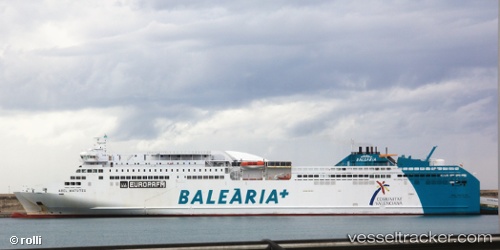 On July 25, 2019, a passenger had to be medevaced from the "Abel Matutes" with cardiac problem. Salvamento Marítimo tasked the helicopter Helimer 215 to take him off. He was hoisted and taken to the La Fe hospital in Valencia.

On Feb 1, 2019, at 5.45 a.m. the "Abel Matutes" upon its arrival from Valencia allided with the commercial dock of the port of Ibiza during the docking maneuver. The ferry suffered damage to its stern which suffered a breach at the ramp above the water line. The ship which serves the Valencia-Palma-Ibiza route had arrived late due to a storm in the region and had attempted to dock twice without success. During the third attempt it struck the pier. Company technicians evaluated the damages. The stevedores of the port of Ibiza have moved the cargo onto the ferry "Sicilia" which was initially bound for Barcelona but has modified its route and headed to the port of Palma, thus covering the route of the "Abel Matutes". Repairs started at Valencia the same day at 9.30 p.m. and sailed again on Feb 4 at 10.10 p.m. The first departure from Ibiza was on Feb 5 at 4 a.m. to Palma, Spanish reports with photos: https://cadenaser.com/emisora/2019/02/01/radio_ibiza/1549010349_953754.html https://www.diariodeibiza.es/pitiuses-balears/2019/02/04/abel-matutes-dique-seco/1045236.html

Baleària Eurolínias Marítimas S.A. (Baleària) Monday announced that, along with Gas Natural SDG, S.A. (Gas Natural Fenosa), it has completed the first liquefied natural gas (LNG) bunkering of Baleària's ferry, Abel Matutes, at the Port of Barcelona. The ferry is noted to have been recently retrofitted with a LNG storage tank and an auxiliary LNG-powered Rolls-Royce engine - an initiative Baleària says will result in an estimated annual reduction of about 4,000 tonnes of carbon dioxide (CO2) emissions, more than 60 tonnes of nitrogen oxide (NOx), and 6 tonnes of sulfur oxide (SOx). http://shipandbunker.com/news/emea/330208-barcelona-marks-first-lng-bunkering-of-balearia-ferry