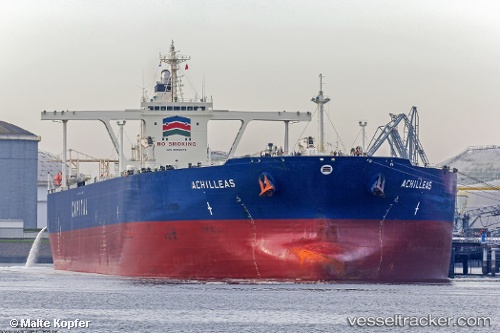 Iran said on Feb 15 that a U.S. move this month to seize a cargo of oil on the grounds that it came from Tehran was an act of piracy, adding that the shipment did not belong to the Iranian government. Washington had filed a lawsuit to seize the cargo, alleging that Iran sought to mask the origin of the oil by transferring it to several vessels before it ended up aboard the 'Achilleas', destined for China. Washington said the cargo contravened U.S. terrorism regulations. The tanker was anchored within the Galveston Offshore Lightering Area, which is outside the U.S. Gulf port of Galveston, as of Feb 17.

The United States Department of Justice (DoJ) on Feb 3 said the United States has filed a forfeiture complaint in the U.S. District Court for the District of Columbia alleging that crude oil aboard the 'Achilleas' was subject to sanctions based on U.S. terrorism forfeiture laws. The complaint alleged a scheme involving multiple entities affiliated with Iran’s Islamic Revolutionary Guard Corps (IRGC) and the IRGC-Qods Force (IRGC-QF) to covertly ship Iranian oil to a customer abroad. Participants in the scheme attempted to disguise the origin of the oil using ship-to-ship transfers, falsified documents, and other means, and provided a fraudulent bill of lading to deceive the owners of the Achilleas into loading the oil in question. The complaint alleges in part that the oil constitutes the property of, or a “source of influence” over, the IRGC and the IRGC-QF, both of which have been sanctioned by the United States as foreign terrorist organisations. Documents alleged that profits from oil sales support a range of activities related to terrorism, including the proliferation of weapons of mass destruction and their means of delivery, support for terrorism, and a variety of human rights abuses, at home and abroad. The DoJ clarified that a civil forfeiture complaint was merely an allegation. In this instance, the United States bears the burden of proving that the oil in question is subject to forfeiture in a civil forfeiture proceeding.

The USA were trying to seize around two million barrels of what it thinks is Iranian oil abboard the 'Achilleas', in the latest attempt to block the Islamic Republic’s energy exports. The tanker was sailing to the U.S. after the Department of Justice issued a seizure order which came before Joe Biden succeeded Donald Trump as U.S. president on Jan. 20, 2021. The Greek owner, the Capital Ship Management Corp., alerted U.S. authorities to the possibility it had unknowingly taken on Iranian crude, after initially believing it came from Iraq. The vessel is fully loaded The tanker received its oil from another ship at the port of Fujairah in November. According to the shipping documents, the 'Achilleas' was then scheduled to sail to Muscat. Its AIS was switched off from Jan. 1 until Jan. 13, when it was sailing near South Africa. It was now traveling across the South Atlantic Ocean.