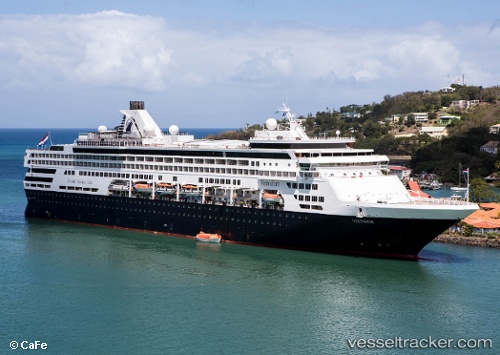 The 'Aegean Majesty', which had been swept away in the port of Corinth due to the strong winds and after its cables broke, has been refloated with the assistance of the tugs 'Pantanassa' and 'Vernikos Sifnos', which had been called from Piraeus in the morning, on Nov 9. The ship was moored outside the port in pos. 37° 57.05' N 022° 56.43' E at 9.20 a.m. where its hull will be inspected to confirm that no damage has been caused. Greek report with photos: https://streetlife.gr/2020/11/09/xekinise-i-rymoylkisi-apo-ta-avathi-toy-aegean-majesty-photos/

Holland America Line announced that the 'Amsterdam', 'Maasdam', 'Rotterdam' and 'Veendam' have been sold and will be transferring to undisclosed buyers. The ships have been sold in pairs, with the 'Maasdam' and 'Veendam' transferring to one company in August 2020, while the 'Amsterdam' and 'Rotterdam' will move to another company in fall 2020. One pair will be going to a new cruise brand.