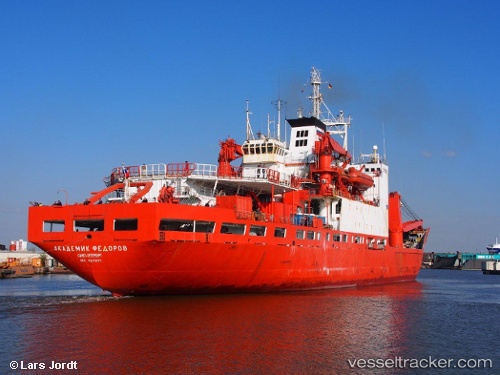 On July 30, 2014, nuclear icebreaker YAMAL commenced providing icebreaking assistance to research vessel AKADMIK FYODOROV, press center of FSUE Atomflot says. The expedition is to accumulate geophysical information on presence of oil-and-gas at Russia’s continental shelf beyond the 200-mile zone. The results will be used as a foundation for Russia’s application to UN Commission on the Limits of the Continental Shelf. The work is being carried out within the framework of the state contract signed between JSC MAGE (Marine Arctic Geological Expedition) and the Department of Subsoil Resources Management at Continental Shelf and Global Ocean of the Federal Subsoil Resources Management Agency. The area under research is about 350,000 square meters. The icebreaker will be involved up to the middle of September’ 2014. Source : Portnews

The "Akademik Fedorov” returned to St. Petersburg on May 30, 2012, with frozen water samples taken from the under-ice lake Vostok. Russian scientists who went there earlier were the first to reach that lake in February 2012. The lake has been preserved under the ice in the Antarctic Region for millions of years. The work to drill a hole 3.768 metres deep, has been going on, with breaks, since 1990. The Russian Academy of Sciences said that this event could be compared, in its scope, with landing on Mars. It may happen that creatures unknown to the scientific community that do not have “relatives” in other parts of the world will be found there.

"Akademik Fedorov" on new expedition to study the Arctic shelf

Scientific research vessel "Akademik Fedorov" has left the Norwegian port of Hammerfest on a new expedition to study the Arctic shelf. The goal of the campaign is to confirm and formalize on legal and scientific level the external border of the continental shelf of Russia. Earlier, Russia submitted to the UN Convention on the law of the Sea its application to the shelf, however it was rejected due to lack of confirmation. If Russia proves that the Lomonosov and Mendeleyev arctic underwater ridges, which extend to Greenland, are a geological extension of its continental shelf, then this country can claim the right to develop huge oil and gas fields in the triangle of Chukotka - Murmansk - North Pole.