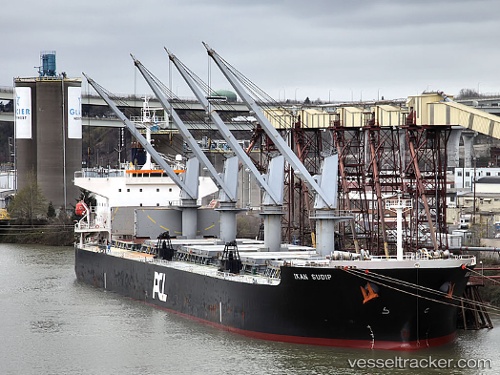 Sold for $ 9.5 Mill. to Undisclosed buyers

The US Coast Guard detained the "Ikan Sudip" after significant environmental and safety violations were found during an inspection in Astoria on May 16, 2015. The bulker was enroute from Longview to Portland. Vessel inspectors from the Coast Guard Marine Safety Unit in Portland discovered the discrepancies during an inspection. The safety and environmental conditions posed an unacceptable threat to the waterways. The Coast Guard Sector Columbia River and captain of the port for Oregon and Southern Washington focused on ensuring that all issues were corrected by fixing the discrepancies and removing the risks found on board the vessel. While inbound to U.S. waters on May 11 the vessel experienced two separate fuel related propulsion losses within 24 hours, which completely disabled the vessel at sea. After regaining minimal propulsion with temporary repairs, the captain of the port expelled the vessel from U.S. waters and prohibited its re-entry until the main engine's fuel system was properly repaired. The vessel crewmembers and propulsion machinery technicians corrected the fuel system issues on May 16, and the vessel was allowed to enter the Columbia River under escort of the tug "Somer S". Vessel inspectors from the MSU boarded the vessel while anchored in Astoria and conducted a safety and security inspection where they identified multiple equipment discrepancies and environmental violations. The violations found included a failure to use engineering procedures required by U.S. and international law, which guide the vessel’s crew through fuel management and vessel propulsion requirements. Other discrepancies were a lack of crew familiarity with emergency rescue drills, deficient structural fire boundary doors designed to prevent the spread of a fire and inoperable lifesaving equipment. Additionally, severe corrosion was found throughout the vessel's machinery piping systems posing a significant threat to the vessel and crew. Coast Guard vessel inspectors were working with the flag state and Nippon Kaiji Kyokai, the vessel’s classification society responsible for certification of the vessel's construction and engineering, Grace Hawk Shipping S.A. the vessel’s owner, EikoKisen Co. Ltd. the vessel’s managing company and the vessel’s crew to make the essential repairs.

Vessel detained due to safety violations

On Nov 5, 2014, the "Ikan Sudip" was detained in Longview until significant safety violations were corrected by the ship’s crew. The Coast Guard was working with the vessel’s crew, owner and managing company to mitigate the safety violations and make repairs to the vessel prior to it departing port. Coast Guard vessel safety inspectors were also working with the the flag state of the "Ikan Sudip" and the classification society, Nippon Kaiji Kyokai, responsible for certificating vessel construction and engineering. The risks posed by the safety discrepancies rendered the vessel substandard with respect to U.S. and international . The deficiencies were determined to pose significant risk to the safety of the vessel, crew and port. They collectively indicate that the vessel was unfit to proceed to sea. Vessel inspectors from the Coast Guard Marine Safety Unit in Portland discovered the discrepancies this week during a routine safety and regulatory compliance inspection of the Panama-flagged vessel. The "Ikan Sudip" was to depart for Manila, Philippines, after the safety violations have been corrected. The safety violations were related to extensive disrepair of various piping systems in the machinery spaces. Additionally, Coast Guard vessel inspectors discovered that half of the vessel’s fire hoses were deteriorated and inoperable, greatly reducing the crew’s ability to fight shipboard fires.