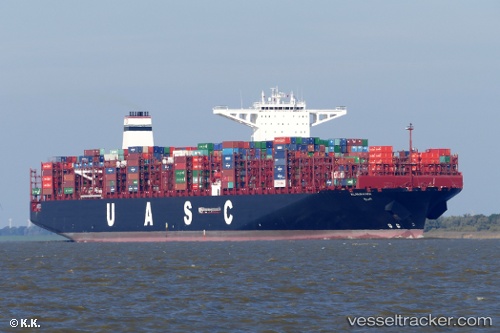 In the morning of Nov 26, 2020, the 'Al Muraykh' ran aground near Al Ismailiya while transiting the waterway in southern direction. She lost power and grounded in the southbound traffic lanes. Two dozen vessels that were ahead of the container ship in the southbound convoy were not affected and continued their transit. while nine other southbound vessels were caught behind the ship. The northbound convoy was also suspended. The Suez Canal Authority dispatched assistance tigs to the stranded vessel. Five hours later the vessel was refloated and moved to an anchorage in the Bitter Lakes for inspections, permitting traffic to resume in the Suez Canal. Hapag Lloyd, operator of the vessel, expected the ship to proceed on its voyage uninterrupted. The 'Al Muraykh' later resumed its voyage from Coryton towards Suez.

UASC mega-ship steams for UK with record load of 18,601 TEU

United Arab Shipping Company has loaded what it describes as a world record 18,601 twenty-foot-equivalent units on one of its brand new fuel efficient mega-ships that is now heading for Felixstowe. The Al Muraykh, delivered in August, departed Port Klang in Malaysia for the U.K. with its full load as part of the AEC1 service, a journey that will take two weeks, the carrier said in a statement. UASC said the westbound shipment was the carrier’s highest utilization on the vessel type that it calls an eco-efficient class. It estimated that CO2 output per TEU on the voyage would be 60 percent lower than if the same containers were shipped on board a 13,500 TEU ship. Containers were loaded by UASC and its partners in the Ocean Three Alliance, CMA CGM and China Shipping Container Lines. The DNV GL-classed ship is the first of a batch of six “A18” (18,800-TEU) vessels that have set new standards for fuel and energy efficiency related to optimized design and advanced propulsion and equipment efficiency technologies. The ship can load 10 tiers-deep below decks with up to 11-high on deck, with 1,000 reefer slots available. The vessel has a crew of 22, including nine officers. http://www.joc.com/maritime-news/uasc-mega-ship-steams-uk-record-load_20151217.html

The second of United Arab Shipping Company’s (UASC) six ordered 18,800 TEU capacity Ultra-Large Container Ships (ULCS), the LNG-ready Al Muraykh, called APM Terminals Zeebrugge today on its maiden voyage to Europe on the AEC1 (Asia/Europe Container Service 1) route. These vessels utilize new advanced technology to reduce CO2 emissions per TEU by 60%, compared with 13,500 TEU capacity vessels delivered just three years ago, and are the largest vessels to be able to operate powered by either liquefied natural gas (LNG) or conventional heavy fuel oil. The vessels are the first to have received DNV GL certification of compliance with the latest LNG regulations. APM Terminals Zeebrugge, which is one of a select group of European container terminals which can accommodate ULCS with containers stacked 10-high on deck and rows 24 containers-wide, handled 406,000 TEUs in 2014, in North Europe’s 7th-busiest container port. As of September 1st, there were 31 vessels of 18,000 TEU capacity or above in service in the global container fleet, with 72 more awaiting delivery. Source: APM Terminals