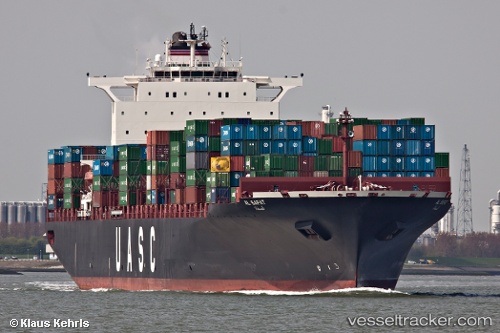 Egypt’s public prosecutor charged the captain and first officer of the "Al Safat" with manslaughter in connection with the collision in the Red Sea that killed 25 Egyptian fishermen on Dec 20. The defendants have been detained since the incident and the prosecutor has ordered the seizure of the ship, last reported as docked in Safaga port. Three crew members of the "Badr Islam" were still missing.

Al Safat said to be vessel which sank the "Badr Islam"

Unconfirmed information pointed out that the "Al Safat" was the vessel involved in the collision with the Egyptian fishing vesse "Badr Islam", with 40 or 45 people on board, early in the morning Dec 14, 2014, in Gulf of Suez between Ras Ghareb and Tor Sinai port, some 50 kilometers from Hurghada port. 13 people were rescued, 13 dead bodies recovered, the remainder of the crew was missing. The collision took place in the dawn. The Kuwaiti container ship’s captain and first officer have been both detained for four days. Preliminary reports showed that the fishing vessel had capsized following the collision with the Kuwaiti ship, which had just passed through the Suez Canal and was heading south. S source told that the cargo ship was sailing in her right course and speed when the fishing boat cut her way. The cargo ship went hard to port in attempt to avoid the clash but unfortunately hit the fishing boat with her aft. The master of the cargo ship was informed by the officer on board about the incident. He contacted VTS Ras Gharibtelling them he suspected they had hit a boat. Since no distress call was received, the cargo ship was allowed to continue and was arrested upon her arrival in Safaga Port wherer The ship’s crew was under questioning by the prosecutor. Meanwhile, the death toll of the collision has risen to 17 as rescuers retrieved four more bodies from the sunken ship. The small fishing vessel had 44 men on board.