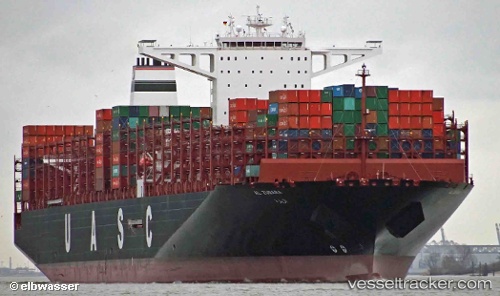 On Dec 18, 2020, az 9.30 a.m. the 'Al Zubara' ran aground, while transiting the Suez Canal in southern direction, in the area of Ismailya . She was refloated with tugs assistance about six hours later and resumed th etransit, which was completed at around 7 p.m. UTC. The ship continued its voyage from Antwerp to Singapore with an ETA as of Dec 31.

The "Al Zubara" lost at least three containers, with an unknown number of others having shifted and been damaged, in the Mediterranean Sea during the night from Jan 16 to 17, 2016, on her maiden voyage. The ship, having come from Port Klang, was caught in rough weather and hit by one or several big waves. It had to call in Málaga as emergency port in order to assess the damaged containers and goods, and fix the shifted containers. In the morning of Jan 18 the tugs "Vehintiocho" and "Vehintinueve" towed the ship to the container dock no. 9 of the Noatum Terminal at 11.15 a.m. A special crane was contracted to handle the ship. There were on the whole 12.600 TEU on board. There were several shifted boxes fore and aft, the greatest damage occurred in the front of the ship where a series of refrigerated containers were found empty. Work to remove the broken containers started in the afternoon, others were secured safely. The railings and secure lines were repaired, the vessel was inspected and resumed the maiden voyage with a slight delay, which will be compensated during the longer passages. The ship resumed its voyage on Jan 19 and had an ETA of Rotterdam as of Jan 22. Reports with photos: http://felixstowedocker.blogspot.co.uk/2016/01/al-zubara-latest.html http://www.laopiniondemalaga.es/malaga/2016/01/18/atraca-mayores-barcos-contenedores-mundo/822386.html# http://www.elestrechodigital.com/transporte-de-mercancias/el-buque-al-zubara-pasa-por-malaga-para-reorganizar-su-carga-y-batir-un-record-historico/ http://www.newsmaritime.com/2016/container-ship-al-zubara-damaged-by-monster-waves-in-mediterranean-sea/ http://www.malagahoy.es/article/malaga/2199431/amarre/emergencia.html http://www.shipspotting.com/gallery/photo.php?lid=2394672 http://www.shipspotting.com/gallery/photo.php?lid=2394675

A celebration co-hosted by UASC and AUB, and attended by Dr. Khaled Fahmy, Minister of Environment (Egypt) and Admiral Mohab Mameesh, Chairman of SCA United Arab Shipping Company (UASC) and Ahli United Bank, Egypt marked the passing of 18,800 TEU Vessel M.V. Al ZUBARA, the world’s greenest ultra-large container vessel, through the new Suez Canal this week. The event is one of the first in a series of activities being organized by UASC to celebrate 40 years in business and was attended by senior dignitaries and officials including Dr. Khaled Fahmy, Minister of Environment (Egypt), Admiral Mohab Mameesh, Chairman of the Suez Canal Authority, Basil Al-Zaid, Chief Financial Officer at UASC, Nevine El-Messeery CEO of AUB and Captain Emad Oraby, the General Manager of UASAC Egypt. Attendees were taken on a guided tour on board M.V. Al ZUBARA, while sailing through the new Suez Canal passage, where Admiral Mohab Mameesh presented a brief introduction to the strategic project.