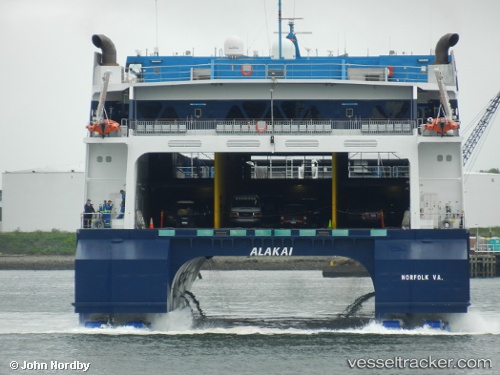 More cancellations due to engine repairs

The "Alakai", serving between Portland and Nova Scotia, which has been having engine problems since the company was forced to cancel its service for a day in late June, had to be assisted by tugs once it reached dock in Portland on July 31, 2017, because the loss of the third engine made the vessel less maneuverable. An abnormality was detected in one of the three remaining engines during its crossing. The ferry likely won’t be able to resume service between the two ports until Aug 3. The company canceled the return service to Yarmouth, Nova Scotia, and the trip from Nova Scotia to Portland on Aug 1 because. The high-speed ferry had been running on three engines since last month when a previous problem caused it to scale back its sailing schedule. Technical crews were sent to Portland to diagnose and address the problem. In an effort to help its customers get to southwest Nova Scotia on Aug 1, the company has added an extra crossing on its Bay of Fundy service that departs Saint John, New Brunswick, at 8:15 p.m. bound for Digby, Nova Scotia.

PORTLAND, Maine (AP) — High-speed ferry service will return this summer between Maine and Nova Scotia on a vessel smaller and faster than one that operated for two financially disastrous seasons. Mark MacDonald, president of the Canadian company Bay Ferries, said the company will operate a twin-hulled vessel under a lease agreement with its owner, the U.S. Navy. USNS Puerto Rico can make the 212-mile trip in 5 1/2 hours. The Nova Star, which ended service in October, took 11 hours. The vessel is similar in size and operation to a previous high-speed ferry Bay Ferries operated on the same route from 2006 through 2009. That vessel was also called the CAT. The Navy ship will be renamed the CAT. "Yes, the CAT is back," MacDonald said at a news conference Thursday in Halifax, Nova Scotia. In the one-year charter agreement signed with the Navy on Thursday, the Navy retains the right to take back the ship at any time. MacDonald said he doubts that will ever happen. He said the Puerto Rico will be configured to carry 700 to 750 passengers and 280 cars. It previously operated as a ferry in the Hawaiian islands under name Alakai. http://www.fosters.com/article/20160324/NEWS/160329647