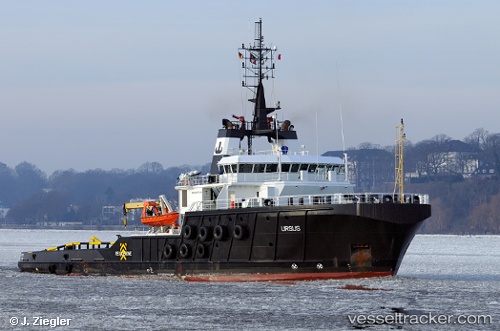 More details became known regarding the pariticpation of the "ALP Forward" in the rescue operation on the North Atlantic on June 9, 2017. At 11:17 a.m. the vessel under command of Capt Eduard Voschenko, whilst navigating the North Atlantic Ocean, received a distress relay from JRCC Halifax. with all vessel in vicinity of position 48 21.3 'N 035 38.7 'W to report. After reporting their position 50"3L.2'N , 034"32,7'W to JRCC Halifax at 11:24 a.m. they received instructions to proceed to the location for SAR operation of the s/y "Happy" in position 48 I2.9I' N 035 33.46'W. At 2.O9 p.m. they received instructions from JRCC Halifax to divert their heading and to proceed for SAR of the s/y "Harmoni" in position 50 06.45' N 35 52.22' W in view of that the yacht was closer to the current vessel then the "ALP Forward" in position 49"54.9'N, 034'44.1'W. She changed course to 258', and, encountering NE 50 knots wind in combination of 10-12 mtr swell, as proceeded fast as possible. At 6.40 p.m. the "ALP Forward" got contact on VHF CH16 with the "Harmoni" and reported that she should arrive within the next 45 minutes. The "ALP Forward" was in contact on VHF CH15 with the Rescue Aircraft Rescue l-l-2 regarding updating information and the last known position of the "Happy" and received at 6:50 p.m. the instruction from JRCC Halifax to change their heading and proceed for SAR of the "Happy" again, position 48 12.9L' N 035 33.46'W due to the updated information that the yacht was taking on water and the crew as in imminent danger. The heading was changed to 170'. On June 10 at 4:06 a.m. the "ALP Forward" contacted on VHF CH16 with the Rescue Aircraft Rescue 335 for an information update of the situation of the "Happy". The rescue craft flew over the position of the yacht towards the s/y "Tamarind" which also was in distress. Contact was established with the "MSC Anzu" which also was in the area and asked the position of the "Happy". Short time later the "ALP Forward" was in contact on CH16 with the "Happy" and asked to switch on their ALDIS. After visual contact was established, the "ALP Forward" started approaching their position for assessing current weather conditions. The decision was made to wait for first light and also for the weather to calm down. The "ALP Forward" contacted the yacht and the "MSC Anzu-2 on CH16 and explained that the first attempt wouldbe done at 08:00 a.m. UTC. Due to still high swell it was decided not to come alongside the yacht. After the JRCC HALIFAX approved and confirmed the rescue plan, at first daylight the crew of the "Happy" was instructed to put on immersion suits life jackets and to take a knife, take a line and VHF's. The "MSC Anzu" was asked to create shelter from the wind and pass close to the position from the North. At 08:20 a.m. the yacht crew was asked to start inflating their life raft. All action was done according to the initial plan. At 08;40 a.m. two persons were recovered in PSN 48"00.0'N,035"02.1'W and reported to JRCC HALIFAX. The "ALP Foreard" covered total during the action period 270 n m. First Aid was given to the rescued Wytse Jan Bouma and Jaap Barendregt. and radio medical advice was obtained from the KNRM. Both persons where happy and feeling good with no complaints. At 1:25 p.m. Capt. Eduard received a confirmation call from JRCC Halifax that the crew of the "Tamarind" had been rescued by the "Queen Mary 2", and the "ALP Forward" was released and changed course to 250" towards Freeport, Bahamas. Dutch report and photos: http://maritiemnieuws.nl/79632/nederlandse-wedstrijdzeilers-gered-op-atlantische-oceaan/ https://www.facebook.com/photo.php?fbid=454984324894355&set=pcb.454990351560419&type=3&theater

Three yachts got in distress during the Ostar/Twostar race across the Atlantic 1600 kilometers off New Foundland in a storm with 60 knots wind and wave heights of 10-15 meters on June 9, 2017. Three yachts activated the EPIRB, and the Canadian Coastguard launched an SAR operation. Rescuers faced challenging conditions during the mission on June 11, but with support in the skies from the Royal Canadian Air Force as well as British and Portuguese aircraft, nearby vessels came to the sailors' aid and brought everyone to safety. Mervyn Wheatley lost the Formosa 42 “Tamarind” due to severe damage, but was rescued by the “Queen Mary 2”. The waves smashed a porthole of the 38-ft-yacht, causing water ingress and steering loss. The single hand sailor was taken aboard the cruise ship after fighting the flooding for hours, and carried on to Halifax. The Dutch sailors Wytse Bouma and Jaap Barendregt suffered a broken mast on the Sun Fast 37 “Happy” and were saved by the tug “Alp Forward”. The Bulgarann sailors Mihail Kopanov and Dian Zaykov were rescued by the “Thor Magni” just before their Luffe 37 “Furia” sank. The other ships tried to reach safe waters. Peter Crowther aboard the Swan 38 “Suomi Kudu” turned around with sail trouble, and Keith Walton aboard the Najad 490 “Harmonii” tried to reach the Azores with engine power after damage to the yacht's rigg. Reports with photos: http://segelreporter.com/regatta/offshore/ostar-rettung-queen-mary-2-fischt-segler-auf-roettgering-kaempft-sich-durch-sturm/ http://www.bbc.com/news/uk-england-devon-40239586 http://infotel.ca/newsitem/all-crew-aboard-distressed-ships-in-transatlantic-race-safe/it43313#.WT16Q2ikLIU http://www.aftonbladet.se/nyheter/a/1lQge/svenska-rebecka-mitt-i-havsdrama-nar-segelbat-forliste