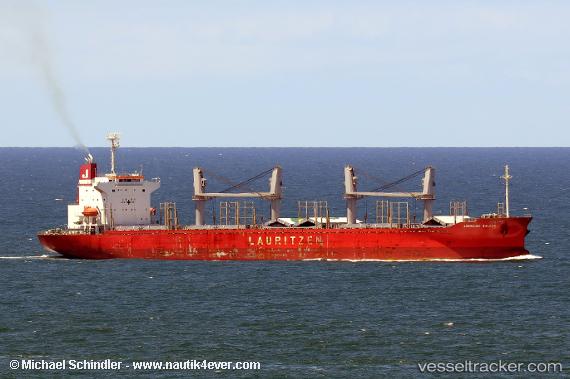 Two dockers died in the early morning of Nov 27, 2018, while unloading logs from the hold of the "Apollo Kita" in Montevideo, and two others have been hospitalized. The victims were believed to have been exposed to a fumigant, and the authorities were investigating to determine the cause. The two Uruguayan dockers from an independent stevedoring company had entered one of the four holds of the "American Bulker". They lost consciousness and collapsed. One of the bulker's crew members saw the victims in distress and entered the hold wearing a face mask. During the course of the attempted rescue, he reportedly removed his mask, and he also lost consciousness. The crewmember has been hospitalized and was in an induced coma. A third stevedore was also receiving medical care. The stevedores did not know that half of the ship's cargo of timber had been treated with a fumigant. The victims entered the hold as they normally would and succumbed. Workers believed that the treatment product was likely phosphine, a broad-spectrum fumigation gas used to control pests in agricultural and wood product cargoes. It is denser than air, and may settle and collect in low-lying pockets.

Two workers dead, one hospitalized due to poisoning

Two dockers were killed by toxic gas aboard the "American Bulker" on Nov 13, 2018, in Montevideo. The ship had arrived at the Port of Montevideo at 4 a.m. coming from the Argentinean Port Concepcion del Uruguay, partially loaded with logs to complete its cargo in Montevideo. Prior to commencement of loading operations, the three cargo holds No.3, 4 and 5 were opened to ventilate, being Hold No. 5 the last to be opened. Two local stevedores and a crane operator, disregarding the master's instructions not to begin operations yet, began working anyway. The two Uruguayan stevedores entered through the manhole of Hold No. 5 and fainted. On a quick reaction to assist the injured people a crewmember already dressed in proper equipment and with oxygen mask entered to the hold to assist but without being allowed by the Master and when sharing the mask with one of the stevedores also fainted. All three of them were rescued with a cage which was unloaded as soon as possible, two stevedores died and one crewmember is hospitalized in coma. Investigations are being carried out by pertinent authorities, since Nov 13, until today. The vessel could not yet begin operations, it would probably be released on Nov 16.