ANTHEM OF THE SEAS 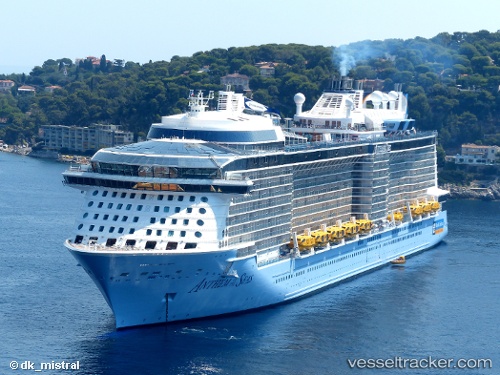 The US Coast Guard medevaced a man from the 'Anthem of the Seas' approximately 150 miles off the coast of North Carolina, on March 13, 2020. The cruise shipcontacted the Coast Guard at approximately 2:45 p.m. and notified them that they had a passenger who was reportedly showing symptoms of appendicitis and was requesting medical care. Watchstanders at the Coast Guard Fifth District command center launched an aircrew aboard an MH-60 Jayhawk helicopter from Coast Guard Air Station Elizabeth City, North Carolina to assist. Once on scene, the aircrew hoisted up the man, accompanied by a nurse, and transported them to New Hanover Regional Medical Center in Wilmington. Report with video: https://coastguardnews.com/coast-guard-aircrew-medevacs-man-from-cruise-ship-off-north-carolina/2020/03/14/

Crew member died on board

A crew member of the 'Anthem of the Seas' that was delayed in New Jersey after more than two dozen of its passengers were screened for the coronavirus was found dead on the ship due to what appeared to be an unrelated cause. 27 Chinese nationals were screened for signs of the virus after the ship docked in Bayonne in the morning of Feb 7. More than two dozen Chinese nationals traveling aboard the vessel were screened for signs of the new virus after the ship returned to Bayonne in New Jersey in the morning. Four were taken to a hospital out of caution. On Feb 8 a 54-year-old crew member died on the ship. Authorities do not believe the man’s death was related to the coronavirus, but were treating it with an abundance of caution as they awaited autopsy results.

After a scare for possible Coronavirus infections on the 'Anthem of the Seas' the ship had a delayed departure from Bayonne, New Jersey. Four guests on the sailing which ended on Feb 7, 2020, disembarked the vessel and were transferred to a hospital in Ambulances. It was feared they possibly the Coronavirus but this was not the case. The guests who were Chinese nationals are being tested but did not show any of the symptoms for the deadly Coronavirus. To be on the safe side, Royal Caribbean has decided to delay the 'Anthem of the Seas'‘ scheduled departure until Feb 8 with embarkation at around 1:00 p.m. The CDC has also given the all-clear for the vessel to depart. There was only a minor change to the ports as the 'Anthem of the Seas' will be departing the Cape Liberty cruise port on Feb 8 at 5 p.m. There will be one day at sea less and the new time for Port Canaveral on Monday are from 2 p.m. until 9:30 p.m. The calls at Royal Caribbean’s private island of Perfect Day at CocoCay and then Nassau, both in the Bahamas will be as normal.