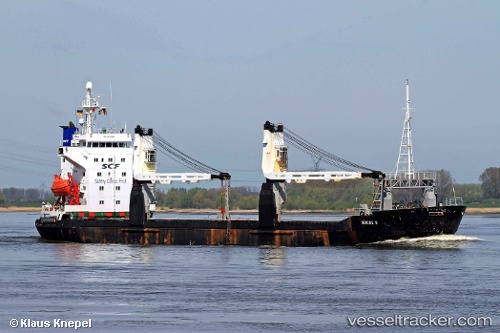 Fire in cargo hold in Haifa

The "Aria Vibe", carrying steel crap in bulk as cargo, suffered a fire in its cargo hold at the Kishon terminal in the port of Haifa on Nov 13, 2018, at 9.45 p.m. A tug assisted in firefighting operations. The cargo hold was flooded with CO2 and the fire was brought under control by fire brigades and crew members. The extent of damage to the vessel was not yet known. The next assessment of the situation was held on Nov 18. No pollution or injuries were reported. The ship sailed again on Nov 22.

The Polish crew members of the "Szafir" were safe and on their way home on Dec 8. Nigerian authorities and the operator of the vessel, EuroAfrica, cooperated in their efforts to free the captain and four crew.

The five kidnapped sailors of the Polish cargo ship, Szafir, have contacted their families and are reported to be “safe and sound,” the Polish Ministry Foreign Affairs (MFA) said yesterday in an update. “Today, the kidnapped sailors contacted their families in Poland on phone and said they are safe and sound. To protect the sailors’ lives, the MFA refrains from providing any further details,” the ministry said. The five crew members, including the captain of the Cyprus-flagged MV Szafir, were kidnapped on November 27, 2015, off Nigeria, when the ship was boarded by a group of armed men approximately seven nautical miles east of Brass at about 01.49 hours local time. The remaining 11 crew members are safe and on board the Szafir, which was escorted by Nigerian Navy to the Onne Port. “For the sake of the security of our citizens, the MFA and the Polish Embassy in Abuja are in constant contact with the Nigerian authorities, the ship owner, and the sailors’ families,” the ministry added. As informed, an emergency task force has been operating at the MFA headquarters since Friday to coordinate further actions. The vessel, which is owned by Voltaire Shipping Company and operated by Euroafrica Services Nigeria Limited, was en route to the Onne Port from Antwerp when it was attacked. The Nigerian Navy and other security agencies have launched a search and rescue operation for the kidnapped crew, the Nigerian Maritime Administration and Safety Agency (NIMASA), said in a statement at the weekend. http://government.leadership.ng/news/479806/safe-kidnapped-polish-sailors-tell-families