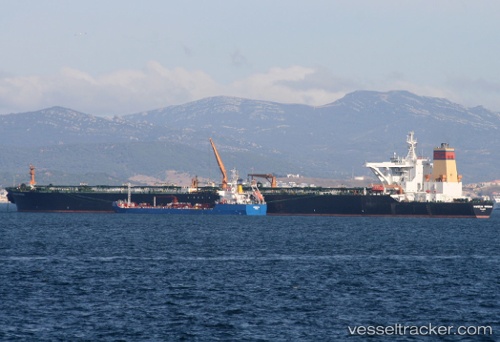 The "Adrian Darya 1" which has long been anchored off Tartus, semmed to be preparing an STS with the Iranian handymax tanker "Jasmine", 46,000 dwt. The "Jasmine", which is formally owned by a company in Lebanon, has already been blacklisted by US authorities for participating in the export of Iranian oil. It could not be proved whether a transfer was actually taking place.

Sept 11 (Reuters) – Iran’s envoy to London said on Wednesday the oil cargo of tanker Adrian Darya 1 was sold at sea to a private company, denying Tehran had broken assurances it had given over the vessel, but he insisted EU’s Syria sanctions did not apply to Tehran. “At (the) meeting with the British Foreign Secretary, it was emphasized that British authorities’ action against the tanker carrying Iranian oil was in violation of international law,” ambassador Hamid Baeidinejad said on Twitter after being summoned in London. “EU sanctions cannot be extended to third countries. Despite numerous threats by America, the tanker sold its oil at sea to a private company and has not violated any obligation,” Baeidinejad added. “The private company … (which is ) the owner of the oil sets the sale destination of the oil,” Baeidinejad told the state news agency IRNA.

The Iranian Foreign Ministry has confirmed that the "Adrian Darya 1" has unloaded its oil cargo in a Mediterranean port, however without directly confirming US information that the supertanker has arrived at Tartus in Syria. The foreign ministry spokesman, Abbas Mousavi, said that Iran - despite all the sanctions and obstacles - will continue to sell its oil. The Iranian announcement came after US national security adviser John Bolton over the weekend had stated that the "Adrian Darya 1" had arrived in Syria, publishing satellite images allegedly showing the Iranian supertanker just outside the port of Tartus.