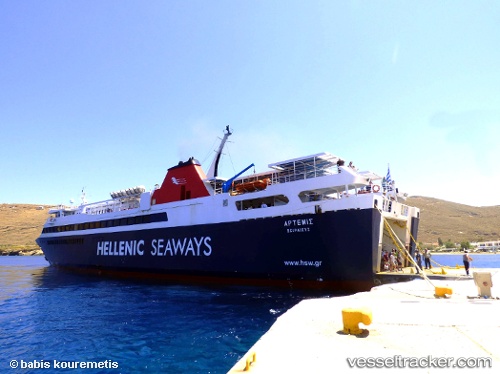 The "Artemis", following its departure from the port of Ios serving the route from Milos to Kimolos - Folegandros - Sikinos - Ios - Naxos - Paros - Syros sustained damage to its starboard main engine on March 16, 2019, at noon. The vessel which was en route to the port of Naxos was able to proceed to the port, using its port side engine. After its arrival at Naxos, the 22 passengers were disembarked. The port authority of Naxos detained the vessel in port, until the engine was repaired. The shipowner organized the further transport of passengers and the vehicles bound to Paros and Syros, as well as the passengers who were waiting in the ports of Naxos, Paros and Syros.

The "Artemis", prior to sailing on its scheduled service from Laurium to Kea, Kythnos, Syros, Paros, Serifos, Sifnos, Kimolos and Milos, sustained damage to its starboard main engine in the morning of Feb 17, 2018. The 94 passengers on board were disembarked and forwarded to their destinations by another vessel. The "Artemis" was banned from sailing by the Laurium port authority, until the engine was repaired and a class certificate of seaworthiness was issued.