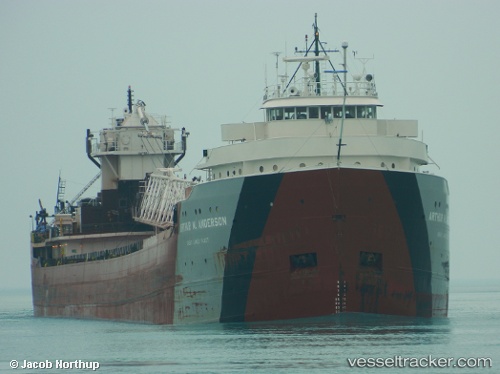 Bulkcer busted out of ice

The "Athur M. Anderson" was busted out of ten-foot thick ice by a Canadian icebreaker on Feb 22. The bulker had languished in frozen-over Lake Erie for five days on its way to Wisconsin after getting trapped by the hefty sheets of ice. Its crew of 10 was stuck on board and hoped to be rescued by the US Coast Guard's "Bristol Bay". But she also ended up getting stuck in the ice, and the Canadian coast guard was called in for help which dispatched the much large "Griffon" to free both ships from the ice. The t icebreaker first rescued the "Bristol Bay", which would have run out of food had a Coast Guard helicopter not made an emergency delivery and which sailed home to Cleveland. Then the "Griffon" turned back and managed to smash a space around the bulkcarrier then carve out a path for the ship to make it to Detroit. The ice on the lake was often six feet thick, with some parts up to ten feet thick. Report with photos: http://www.dailymail.co.uk/news/article-2964559/Freighter-trapped-10ft-ice-five-days-finally-rescued-Canadian-coast-guard-ship-U-S-sent-got-stuck-ice-itself.html#ixzz3SYmst4s7

The U.S. and Canadian Coast Guards were working together to break free the "Arthur M. Anderson" beset in ice near Conneaut Harbor, and turn it around in Lake Erie so it can head to Sturgeon Bay, Wisconsin, for its winter layup. The Coast Guard Cutter "Bristol Bay", a 140-foot ice-breaking tug homeported in Detroit, has been just outside of Ashtabula for several days battling 8 to 10 feet of ice in areas and brash ice up to 5 to 6 feet thick. The progress has been slow in getting into Ashtabula, so the Canadian Coast Guard Ship "Griffon" has been called to assist. The "Griffon" is stationed in Prescott, Ontario, and is a 234-foot multi-mission medium icebreaker. The "Arthur M. Anderson" is currently outside of Conneaut Harbor awaiting assistance. The "Bristol Bay" is en route back to Cleveland. The "Griffon" will join up with the "Bristol Bay" and they will clear a path into Cleveland. The "Bristol Bay" will fill up on fuel and will resupply with food. Once a path is cleared into Cleveland, the "Griffon" will head out to Conneaut Harbor and break free the Anderson. After working tirelessly for several days and making slow progress, the crew of the "Bristol Bay" was running low on food for its crew, so a Coast Guard air crew from Air Station Detroit delivered 100 pounds of food via their rescue basket in the evening of Feb 19. The delivery was an opportunity for the air crew and the cutter crew to conduct regular hoist training while delivering needed supplies. Report with photos: http://www.uscgnews.com/go/doc/4007/2466054/

A Great Lakes freighter has been stuck in thick Lake Erie ice for days. The Bristol Bay, a 140-foot Coast Guard ice cutter out of Detroit, can cut through ice up to 6 feet thick, but cannot cut through 10 feet of ice between Ashtabula and Conneaut. The crew of 10 aboard the Arthur M. Anderson freighter is about five miles from shore and has plenty of food and fuel. The Bristol Bay had to turn around and head back to Cleveland's Coast Guard station for gas and supplies before it heads back out this weekend with a 234 foot Canadian Coast Guard Cutter. The cutters will team up to try and free the freighter this weekend. Once the Arthur Anderson is free it will have to find another port to dock in because there's too much ice in Conneaut and Ashtabula. Wisconsin is the freighter's home base. Video and more at http://www.newsnet5.com/news/local-news/oh-ashtabula/coast-guard-attempting-to-rescue-freighter-stuck-in-lake-erie-off-coast-of-conneaut