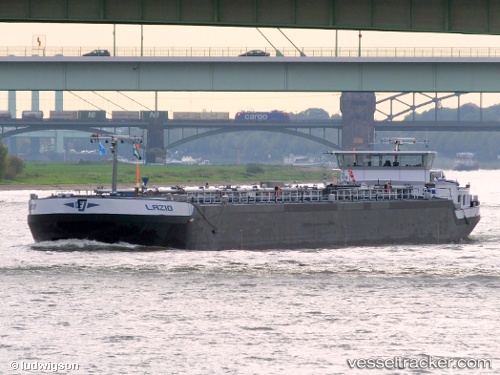 After the collision of the ‘Lazio‘, 2997 dwt (EU-No.: 02326621), and the ‘MSC Maas‘, 3041 ts (EU-No.: 02323207), on the river De Noord on Nov 5 at 8.15 p.m., the container barge was completely unloaded at the container terminal in Alblasserdam on Nov 6. When the stern rose from the water, the significant damage became visible. The stern had suffered a large leak with lots of crushed steel. The 'Lazio' which had come from Nieuwegein and had berthed in Dordrecht after the accident, continued the voyage to Rotterdam at 2 p.m. and berthed in the Geul Port at 3.50 p.m. Rijkswaterstaat and the Dutch police launched an investigation into the collision. Photo: https://www.kustvaartforum.com/download/file.php?id=64564

Allision on the Noord

The‘Lazio‘, 2997 dwt (EU-No.: 02326621), and the Dcontainer barge ‘MSC Maas‘, 3041 ts (MMSI: 244620965; EU-No.: 02323207), allided on Nov 5, 2019, at 8.15 p.m. on the Noord between Hendrik-Ido-Ambacht/Rotterdam, and Alblasserdam. The container ship was docked at the quay in Alblasserdam. The tanker approached the merchant quay in Dordrecht and hit the rear oft he container ship which was breached and suffered water ingress. The Fire brigade, KNRM and Rijkswaterstaat attended. After the containers were removed from the ship by a container crane, the leak could be patched. The emergency services were stood down after an hour. Dutch report with photos: https://www.zhzactueel.nl/2019/11/05/tanker-en-containerschip-botsen-op-de-noord-tussen-hendrik-ido-ambacht-en-alblasserdam/ https://www.rijnmond.nl/nieuws/188172/Containerschip-botst-op-tanker-op-de-Noord

The "Lazio" on Nov 28, 2011, at 5 p.m. allided with the Botlek bridge in Rotterdam. The wheelhouse of the ship was completely destroyed, a 46-year-old woman from Merksem was slightly wounded. She went to a hospital for examination, but was a few hours later aboard. The liftof the bridge was damaged but it was still passable to traffic. The tanker was moored at the quay in the Hartel Canal. Dutch report with photo: http://www.schuttevaer.nl/nieuws/actueel/nid16782-stuurhuis-lazio-vernield-na-aanvaring-met-botlekbrug.html