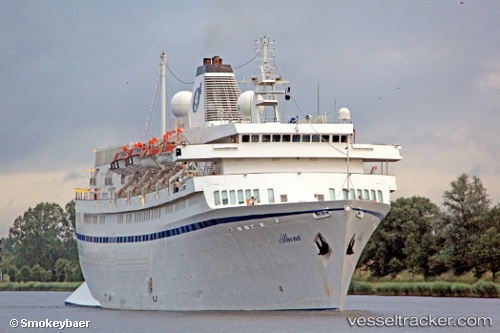 The 'Astoria' was set up for auction again by the CW Kellock & Co. Ltd. Interested parties were invited to chime in, with an inspection in Rotterdam being possible by arrangement. No starting price has been set as of now, but offers are invited.

Laid up cruise ship sold to US consortium

On July 25 it was announced that the 'Astoria' will be refitted for further cruise service after having been sold to the same consortium of five high net-worth individuals from the US who in January acquired the cruise ship 'Funchal' at auction which were previously operated in the fleet of Lisbon-based Portuscale Cruises until it became insolvent in 2015. Teamson Lda, which became the registered owner of the 'Funchal' in April, has sent the ship to Naval Rocha Shipyards near Lisbon for a two-month dry-docking. The 'Astoria' will be towed to Lisbon from its current lay-up moorings in Rotterdam, after which it will also undergo an extensive refit at Naval Rocha. The 'Funchal' will be converted into a luxury boutique hotel that will be docked in Lisbon. The 'Astoria' will be used to operate cruises from Lisbon to Portugal’s island territories in the Atlantic.

On July 25, 2021 the foghorn from the Italian cruise ship 'Andrea Doria', which sank after the collision with the 'Stockholm', today the 'Astoria', sounded again in a livestreamed anniversary event at the New Jersey Maritime Museum in Beach Haven. It was the first time the liner’s horn has been heard since it blew on sinking 65 years ago before being hit by the 'Stockholm' 100 miles off Nantucket in 1956. Eight survivors joined technical divers, maritime historians and restorers for the 65th anniversary event. The restored Kockumation horn is 1.2m long and its trumpet 60cm in diameter. Attached to an iron replica of a mast section, it weighs 227kg. It was discovered in 2016 by a dive team led by Joe Mazraani, captain of the Atlantic Wreck Salvage dive vessel 'Tenacious', which has carried out annual expeditions to the 'Andrea Doria' since 2010. He spotted it beneath the mast and it was brought up the following summer.