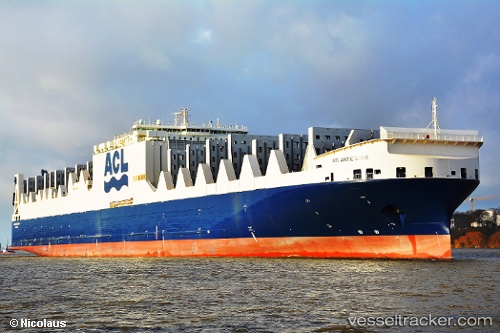 On Friday, Atlantic Container Line (ACL) christened its new G4 vessel, the ATLANTIC STAR, at the Helen Delich Bentley Port of Baltimore’s Dundalk Marine Terminal. Commissioner Rebecca Dye of the Federal Maritime Commission acted as godmother of the vessel. The ATLANTIC STAR is registered in the United Kingdom. The original ATLANTIC STAR, which was part of the original ACL G1 fleet 50 years ago, also flew the British flag. The ATLANTIC STAR is one of five vessels in ACL’s new G4 fleet. The ATLANTIC STAR and its sister vessels, ATLANTIC SAIL, ATLANTIC SEA, ATLANTIC SKY and ATLANTIC SUN have dramatically improved ACL's competitiveness on the North Atlantic. The G4s demonstrate to ACL’s customers and suppliers that its parent company, the Grimaldi Group, continues to invest in ACL for the long term.

The "Atlantic Star" suffered major radar damage after a ship to shore gantry crane made contact with it on Feb 19, 2017, at the Royal Seaforth Dock in Liverpool, where it had docked on Feb 18. The damaged radar has been removed, but repairs were expected to last another 7-10 days before the ship would be ready to sail to Halifax.

The number of calls by environment-friendly seagoing ships in the port of Antwerp is increasing year by year. In 2012 there were 462 such “green” calls, but three years later the number stood at 671 (and that was just for the first nine months). The brand-new conro carrier the Atlantic Star operated by the Grimaldi subsidiary ACL is a good example of a “green” ship. Thanks to its revolutionary design its ecological footprint is considerably lower. The vessel berthed in the port of Antwerp for the first time at the end of December. Conro (container/ro-ro) vessels are able to carry containers, cars and other rolling stock. The Atlantic Star is the first of a new generation of ships operated by ACL for the trans-Atlantic service connecting Hamburg, Göteborg, Antwerp and Liverpool with Halifax, New York, Baltimore and Norfolk. Thanks to their design the Atlantic Star and the four sister ships in the new G4 series have 105% more capacity for containers, 31% more for cars and up to 45% more for rolling stock. They are also considerably more environment-friendly than the previous generation, with a good 65% less emissions per container.