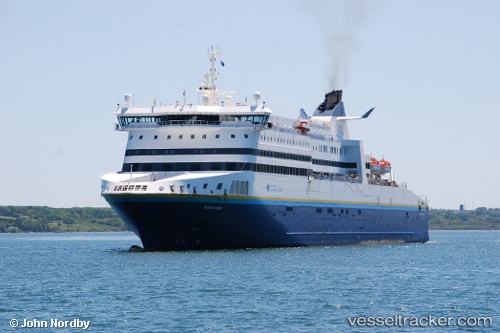 The 'Atlantic Vision' was unable to close its stern ramp upon leaving the port in Argentia on Aug 19, 2021, at around 7.35 p.m. Repairs were carried out which allowed the vessel to safely depart the port on Aug 20 at 12.30 a.m., headed to North Sydney.

The 'Atlantic Vision', enroute from North Sydney, suffered a failure of its thermal oil piping which caused the engine room compartment to fill with smoke in position 48 57 42 N, 063 06 30 W, about 54 miles ENE of Gaspe, Quebec, on Nov 26, 2020, at 09.20 a.m. The fire teams were mustered, the leakage was controlled, and the area was ventilated. Then the 'Atlantic Vision' continued its voyage to Les Mechins, where it arrived at 9.30 p.m. and remained stationary since in the local drydock of the Verrault Navigation Inc.

Marine Atlantic has extended the charter of the 2002-built ro-pax ATLANTIC VISION for another year, until November 2020, with an option to further extend the charter agreement for another two years.