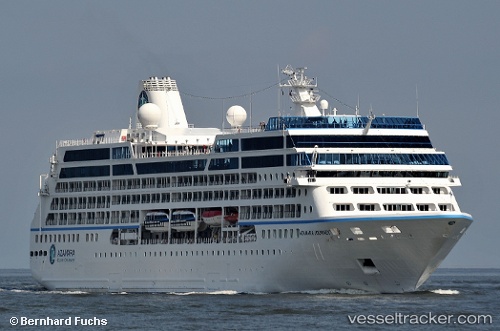 An elderly British passenger had to be medevaced from the 'Azamara Journey' on Jan 24, 2023, which had had to turn around and race back toward Port Elizabeth, while en route from Durban to Cape Town and having already passed Algoa Bay when the emergency occurred. At 1.30 a.m. the NSRI Gqeberha (Port Elizabeth) was alerted by the MRCC, requesting that they rendezvous with the ship at sea and take the patientoff, who required emergency medical treatment ashore. The lifeboat ‘Spirit of Toft’ was launched, accompanied by EC Government Health EMS rescue paramedics, and rendezvoused with the vessel between 12 and 15 nautical miles off-shore in 45 knot winds and rough seas. An EMS rescue paramedic and two NSRI rescue swimmers were transferred onto the vessel where they found the 87-year old lady passenger had been stabilised by the ship’s medical team. The patient was secured into a Stokes basket stretcher, and in a high angle rope technical rescue operation she was transferred onto the lifeboat which brought here to the NSRI Gqeberha rescue station where she was transferred into an EMS ambulance and transported to hospital in a serious but stable condition. She was not accompanied by any family or friends. The rescue operation was completed at 6 a.m.

The Central Port Authority of Rhodes was informed on Nov 9, 2022, at midday that a 72-year-old passenger of the 'Azamara Journey', which was sailing 51 nautical miles southeast of Rhodes en route from Piraeus to Limassol, needed immediate hospital care. Immediately, a patrol boat proceeded to the ship and took on board up the patient. He was transported to the port of Rhodes, where he was picked up by an ambulance and transferred to the General Hospital of Rhodes for further medical treatment.

After the sinking of the 'Pothitos III' at the island port of Patmos on Oct 21 at about 06.40 a.m. while assisting the inbound cruise ship 'Azamara Journey' in a bay east of Patmos, an investigation was launched into the circumstances by the Patmos Port Authority. The cruise ship suddenly dragged the tug, while the circumstances have not been formally established The deckhand, aged 26, abandoned ship and was rescued by a launch from the cruise ship and was returned safely to the port. The skipper, 45, was recovered unresponsive from inside the wreck by a team of private divers. He was transported to a nearby health center, where his death was confirmed. The local port authority has requested an autopsy. The tug is in deep enough water that it will not hinder navigation. The 'Azamara Journey' routinely calls at Patmos, Mykonos, Rhodes, and elsewhere in the Greek isles. The same evening, she departed Patmos for her next destination, Santorini.