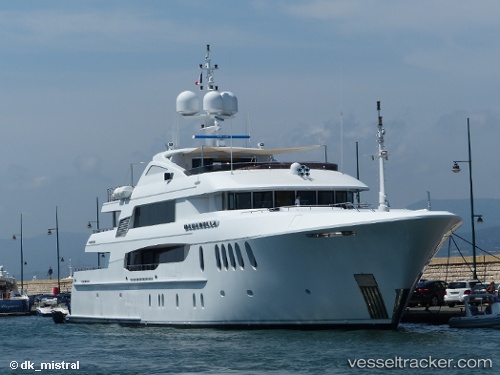 Investigators were now blaming a loose cover of a newly fitted helideck fuel depot for the helicopter crash at the "Bacarella". Video footage, include CCTV taken from the yacht , shows the cover being whipped up into the main rotor by the downdraft as the UK registered Airbus AS 350 came in to land. It went through the main rotor disc. The cover was custom made for hiding a fuel depot newly installed on the helideck. The pilot observed the cover moving and attempted to avoid it by initiating a climb. The cover hit the main rotor, and control over the helicopter was apparently lost. It rotated around its vertical axis while moving backwards, and struck the sea tail first. The pilot activated the Emergency Floating System which prevented the helicopter from sinking. The Haukeland University Hospitalas treating a 57-year-old man, who was in a critical condition. The other two hurt suffered minor injuries. The pair was released from hospital on May 11, and the Foreign Office was assisting all three Britons. Report with video: http://www.bbc.com/news/uk-39895317

One person was seriously injured and two men, aged 53 and 62, more easily after a helicopter owned by the British company HQ Aviation dropped into the sea next to the "Bacarella" at Elsesro off Sandviken in Bergen on May 10, 2017, at 9.24 p.m. The helicopter was coming in for landing. As it approached the yacht, the rotor hit the top deck after possibly having been got caught in a tarpaulin. The rotor freaked out and the helicopter turned on the top. It landed on its back in the sea. The injured, among them two British nationals, were taken to the Haukeland University Hospital. Blood samples have been taken of one or more of the three on board the helicopter, but investigator Frode Karlsen emphasized that there is no suspicion of substance abuse. The helicopter was pulled to land and investigated. Divers of the fire brigade went down and confirmed that there were no more people inside the wreckage of the helicopter. There was currently no need to evacuate the yacht that was moored near the position where the helicopter went down. The lifeboat "Bjarne Kyrkjebø" was on site after just two to three minutes after the crash because they were already in the area having towing mission in the area and witnessed the incident. Their immediate response saved the lives of the injured. Several other vessels responded too, including two ferries and small boats. The helicopter had flown from Shetland earlier before it refueled at Flesland and later headed to the yacht in Sandviken. The owners usually fly to the boat to stay there for a few days at a time. The yacht which was in Bergen since end of April, was sold at an auction in 2014 for over $ 30 million. The police have started with preliminary interrogations of witnesses, but it was too early to say something about the course of events. The helicopter wreckage, floating bottom up in the water, was secured and towed to Bontelabo at 11 p.m. and transported to a suitable storage for further investigations on May 11 at 12.20 a.m. There was mahjor damage to the rotor and the tail section. The windows were broken. The crew of 17 of the yacht, which meanwhile berthed at the Bradbenken Sailing Boat Pier, was to be questioned too by the Accident Commission. Norwegian reports with photos: http://www.bt.no/nyheter/lokalt/Helikopter-styrtet-i-sjoen-i-Sandviken-334369b.html http://www.vg.no/nyheter/innenriks/bergen/helikopter-krasjet-i-sjoeen-i-bergen/a/23995147/ http://www.hegnar.no/Nyheter/Naeringsliv/2017/05/Helikopter-styrtet-fra-yacht-i-Bergen https://www.abcnyheter.no/nyheter/norge/2017/05/11/195301762/briter-i-helikopterstyrten-i-bergen http://www.dagbladet.no/nyheter/helikopter-styrtet-i-sjoen-i-bergen---n-person-kritisk-skadd/67562622 http://www.tv2.no/a/9119683/ https://www.abcnyheter.no/nyheter/norge/2017/05/11/195301762/briter-i-helikopterstyrten-i-bergen http://www.vg.no/nyheter/innenriks/bergen/helikopterstyrten-i-bergen-slik-var-den-dramatiske-redningsaksjonen/a/23995396/