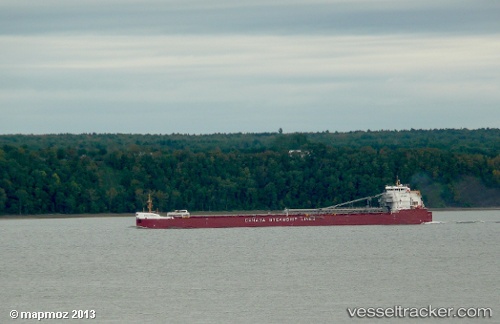 The "Baie Comeau" suffered a problem with one of its controllable pitch propellers one mile from South Cornwall, Ontario, in position 44 59 42N, 74 43 28W, on Sep 11, 2019. The vessel proceeded to Cote-Sainte-Catherine, Quebec, where repairs were carried out by the crew.

The last of Canada Steamship Lines’ (CSL) four newbuild Trillium Class self-unloading Lakers, the Baie Comeau, was delivered on June 20, 2013 and set sail on her maiden voyage on June 30, the shipowner and operator said in a press release. She departed at 11:48 CST from Chengxi Shipyard in Jiangyin, China, en route to Montreal, Quebec, where she is set to operate throughout the Great Lakes and St. Lawrence Seaway. Commanding the Baie Comeau as she crosses the Pacific Ocean and transits through the Panama Canal are Captain Andriy Bondarenko and Chief Engineer Francis Cotton. She is expected to take approximately 50-60 days to complete her voyage. When she arrives in Montreal in early September, she will join her sister ships, the Thunder Bay, the Whitefish Bay and the award winning Baie St. Paul. Two new bulk carriers are also set to join the Canada Steamship Lines fleet in 2013-2014.